An Interview with Mauro Evangelista

Of the many opportunities offered artists selected each year for the BCBF Illustrators Exhibition, one is especially reserved for budding young talents under 30. Since 2012, the Ars in Fabula Grant Award has given one of the young artists selected the opportunity to attend the Ars in Fabula Master’s Course in Illustration for Publishing. Established by the ARS IN FABULA School of Illustration together with Bologna Children’s Book Fair, the award is attributed each year by a jury made up of members of the Master’s faculty who meet in Bologna during the book fair. We asked Mauro Evangelista founder of Ars in Fabula to tell us something more about the Grant Award.

Who are the jury members that each year visit the BCBF Illustrators Exhibition to decide who will be offered the study grant?

The jury is always made up of Luigi Raffaelli, Walter Foschesato and myself. As well as an illustrator’s point of view, we also want to have input from a renowned illustration critic and expert like Walter Foschesato. We also have what I would call a “popular jury” made up of people from Ars and the book fair - each year there is an animated discussion as they plead the cause of their favourite!

What are the criteria for choosing the winner? Do you make an  articulated analysis, or is it more a question of your immediate response to the overall illustration?

An image has an immediateness and forceful impact on the viewer. But first impressions then give way to other considerations like, for example, narrative ability, artistic features - composition, drawing, and colour - consistency with the text or the work’s appropriateness for its target readership. Obviously, in the case of young “unpublished” artists who are still finding their way, we try to get a glimpse of that ineffable spark of talent we believe an illustrator must have.

Have there been years when the choice was particularly difficult?

The question should rather be: have there been years when the choice has been particularly easy? The answer is a decided no!

We have to choose an illustrator from those selected for the Illustrators Exhibition of the Bologna Children’s Book Fair, so someone who, even if young, has already made it past an international jury. So you can well understand how having to choose just one is very difficult; we feel the great responsibility of our choice. I really want to thank the members of the jury for the enormous work done over these years, which has been amply confirmed by the subsequent careers the various winners of the Grant Award have gone on to achieve as acclaimed professionals of international standing.

I also want to commend the winners who have been at our school over the years. With each of them we went on a long journey.

All the winners reached professional level, each of them finding their own way in the world of illustration, publishing in Italy and abroad.

We were struck by Louise Heyman’s talent for engraving, an ancient art that in her hands took on a new dimension thanks to the really interesting research project she continued also during the Master’s course. Today she teaches artistic engraving at Hamburg’s University of Applied Sciences.
Teresa Manferrari’s coloured world immediately captivated us, a talent she further developed with her admirable use of acrylic in her projects for Sinnos and Rizzoli Education!
Bruno Zocca, who trained at ISIA in Urbino, proposed surprising landscapes - part dream-world, part adventure scene out of Jules Verne.
Jean Mallard astounded us with ironic, cheerful yet daringly geometrical compositions and a bestiary populated by phantasmagorical creatures.
Then there are the poetic creations of Cecilia Ferri, an excellent illustrator with publisher Kite. She has recently had her Master’s thesis “Ora o mai più” published (Kite 2020) with a text by Davide Calì.
Veronica Ruffato “burst” on to the professional scene very early on. Her Master’s thesis “Il brutto anatroccolo”, published by Zoolibri, was a candidate for the 2019 ‘Andersen Prize for the Best Picturebook’. She is one of the most significant Italian talents, and publisher Corrado Rabitti showed great foresight when they spotted her.
What struck us immediately about Olga Shtonda’s work was her page composition, graphic excellence and delicate figures in an elegant 1960s style.
Elisa Cavaliere has just started her Master’s during the Covid emergency. Being in Bologna, she has not had the special experience of direct communication during class, but we have tried to make her feel “one of us” with videos of our school in the classrooms of the historic Palazzo Compagnoni Marefoschi while we wait to welcome her in Macerata. In any event, the principal Alessandra Sconosciuto has already made her feel ‘at home’.

The story of JooHee Yoon is an incredible one. During the Master’s course she met Fausta Orecchio and Simone Tonucci from publishers Orecchio Acerbo and it was at the worktables of Ars in Fabula that “Re Tigre” (text by James Thurber, illustrations by JooHee Yoon) came about and was co-published by them and Else in 2013. The book was a great success, crossing the Atlantic to end up in the prestigious New York Times ranking among the Ten Best Illustrated Books of 2015!
“Re Tigre” (“The Tiger who would be King”, Enchanted Lion Books, 2015) was the very first ‘made-in-Italy’ book to enter one of the most important rankings in the cultural world. I like to remind people that it was back in 1959 that the famous book “Little Blue and Little Yellow” by Leo Lionni, published in America by Random House, made the rankings - coming to Italy only later in 1967 thanks to Rosellina Archinto; and about thirty years later, my dear friend Roberto Innocenti’s “Christmas Carol” published by Creative Editions in 1990 was the other classed among the 10 Best Illustrated Books. So JooHee Yoon is in excellent company! 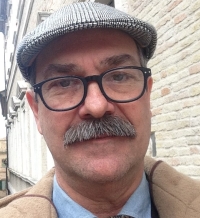 An image has an immediateness and forceful impact on the viewer. But first impressions then give way to other considerations...

TAG: Illustrators Exhibition Ars in Fabula
back to previous page