A double interview with 2 "bolognesi" by choice 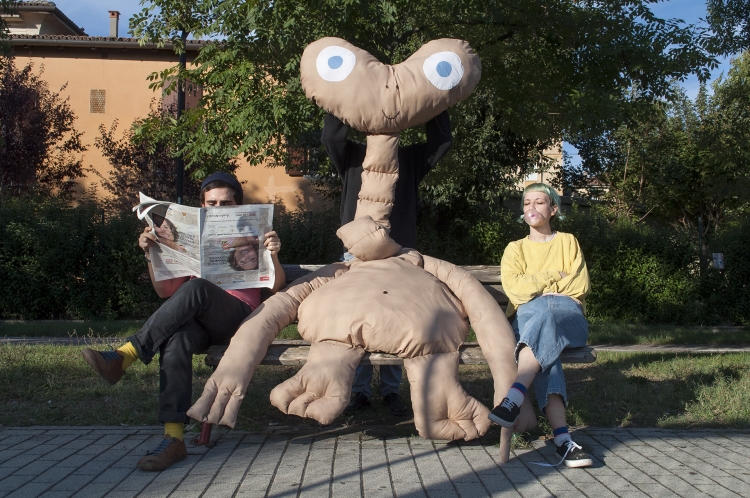 Andrea Antinori and Noemi Vola, whose works were selected for several Illustrators Exhibitions, are two of the most promising illustrators we’ve seen in the last few years.*

An artistic partnership that has led to some very interesting experiments, such as co-designed illustrations and small exhibitions, in which both the artists’ styles and techniques merge and blend, building perfectly shared worlds.

You’re both “Bolognesi” by choice. How did you react to the news that your works were selected for the Illustrators Exhibition?

Noemi: I wasn’t expecting it!
Many of the illustrations selected by the fair are in colour, clean and perfectly made. Mine, on the other hand, were black and white, not centred on the sheet, stained and not done perfectly!

Andrea: Amazement. After several years of trying, sending illustrations that I cared a lot about, I was selected when I sent the ones that I’d done to try a new technique. I then used the same technique for the book Christ's entry into Brussels. The following year I sent a selection of illustrations from this book, but they were not selected.

When did you first discover the Illustrators Exhibition? When did you decide to submit your works?

Andrea: Living in Bologna, the Book Fair has always been a given. I can’t actually remember when I first heard about it. I went to the fair as soon as I got the chance, at 18. For me, things happened the other way around. It was by going to the fair and exploring it that I decided to try and become an illustrator myself.

Noemi: It was the same for me. As soon as I was 18, I went to the Bologna Children Book Fair for the first time. I didn't end up there by chance, though. I’m from Bra, so the fair was not that close.

Your styles mix perfectly with each other. How did you achieve this sort of “artistic symbiosis”?

We started copying each other (not without asking each other's permission, of course!), and then we couldn't stop.

Are there any artists whose works you’ve been influenced by?

Are there artists you would like to work with in the future?

Every now and then, as a joke, we say that we’d like to found our own publishing house, even though we only know what we’d like to call it: Scusa Edizioni. We’d like to publish only a few books, but exactly the way we want. This would be an opportunity to reach a new level of collaboration, and also provide us with the excuse to contact authors we like and ask them if they’d like to take part in our project.

However, we’d both like to work with Andrea De Franco.

We started copying each other ... and then we couldn't stop.