Kid’s Digital: an expanding market (also in these new times…) 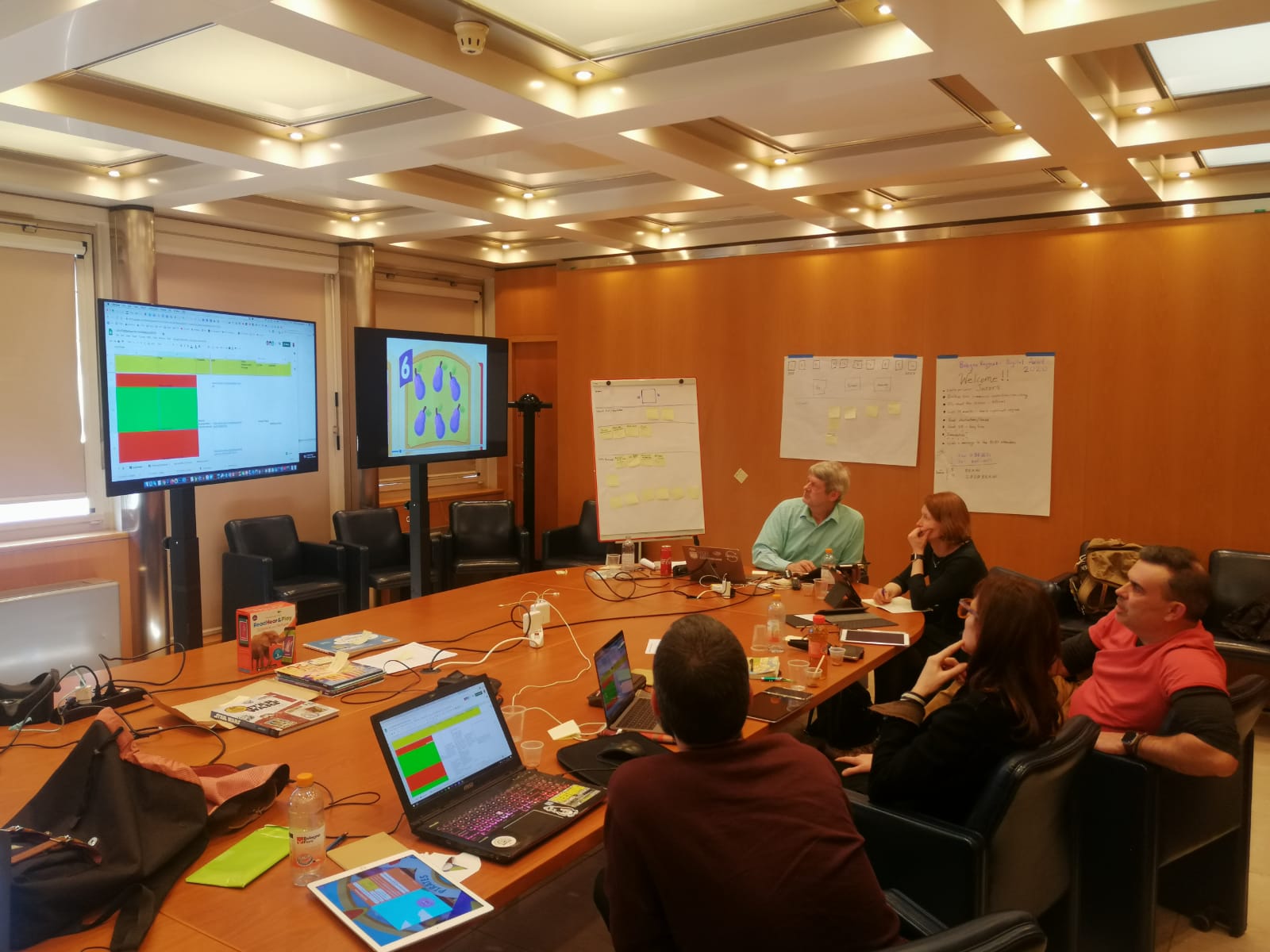 The Bologna Children’s Book Fair has been focusing on a great deal of children’s digital content for many years now.

Two decades have passed since the first Bologna New Media Prize was established in 1997, in partnership with the Children’s Technology Review. In 2002, together with the Microsoft Foundation, BCBF introduced the Children’s eBook Award, which was cancelled after few editions as it was a prize before its time

In 2012, the award was updated to include interactive digital media: since then, the BolognaRagazzi Digital Award (BRDA) has been a spotlight on all the latest trends and developments in children's digital content including apps, content libraries, web-series and websites.

We have asked the 2020 BRDA Jury which are the main trends shaping the kid’s digital media industry today.

N.B These comments were made before the Covid-19 crisis but it’s interesting to highlight a positive outcome that has been renewed interest and ideas around kids digital publishing and the whole discussion on the usefulness of screen time. “COVID19 – says Neal Hoskins - has brought back into focus the usefulness of apps and their different services. In terms of kindergarten/primary level resources this new form of kid’s media have already proved their worth 100s of times over and I hope this will bring schools, teachers parents and educational authorities to reach a new level of understanding into  how apps have a place at home and in school classrooms.”

The rapid technological changes over the past two decades has created opportunities and challenges for children’s publishers. We’ve certainly seen the results over the years in the products entered in the BolognaRagazzi Digital Award. Challenges include a difficult route to monetization, as publishers struggled with an app store economy that plays by a set of rules that is often incompatible with ethical children’s content. Against the backdrop of all these changes are the constant forces of a good story to tell with quality illustrations and sounds. There is no substitute for these elements, whatever the medium This makes the Bologna Children’s Book Fair the natural place to discover some of the world’s most innovative digital work specifically for children. Last year for example we saw some especially noteworthy book/app applications, where the app augments the book content by making ideas pop off the page. Most recently new AR (augmented reality) tools have made it easier for a publisher to move into this space with little risk. We’re excited to see what new surprises this year brings.

The panorama of digital content for children has changed very quickly in recent years. Many publishers and developers have experimented in different directions, looking for sustainable business models. The main trends that have emerged in recent times concern the enhancement of assets developed in the past through the creation of libraries of content that work on a subscription basis, following a trend that is emerging even in sectors such as TV on demand. The subscription-based model makes it possible to retain a user base and to have fairly constant revenue streams. It’s obviously used by large publishers, but also by small developers, especially in the education sector, where parents are more likely to pay for digital content.

The narrative apps, on the other hand, after a period of difficulty, have reappeared on the scene, taking on a rather intense and increasingly similar output to video game dynamics. The interesting thing is to notice how digital characters for children become famous in the app universe and are now passing onto other media like cartoons. It’s the umbrella of a cross-media universe in which narrative universes, regardless of where they are born, tend to migrate seamlessly from one medium to another.

It’s an exciting time in the development of digital content for kids. Consumer appetite for subscription models has been a huge relief to an industry that has always struggled to find a sustainable business model. Whilst, other approaches still persist and child-friendly advertising is one to watch, subscriptions are the real game-changer.

I feel the industry is going through a period of crossing the chasm, an unsettling time for any industry. However, there is an increasing air of optimism amongst those who have made it to the other side! After a period of introspection while they focused on subscription processes and retention, now is the time when they are turning back to content with a recognition that rolling out the right new content is key. In particular, I’ve seen an increasing understanding that a user-centred approach to development is critical which is resulting in a better experience for children, parents and teachers.

The education space is particularly interesting at this moment. Here there is a big focus on online services over and above apps because these are more widely accessible in every school (although online + app solutions are ideal). The education sector is a competitive space. To be successful brands have learnt they must demonstrate real understanding of what teachers need, as well as a great experience for the children. User-centred design and user testing in schools, for this reason, is now considered vital. Other key trends in this space include:

It is interesting to note that innovations like AR and UGC are finding a place in classrooms arguably better than outside them for children. For the latter, challenges with GDPR compliance are easier to overcome in the closed, teacher-controlled environment of a school, making this an area to watch.

Within the leisure space for children, competition is even stronger and more diverse. In the last 12 months, I’ve particularly seen how brands/licenses, known primarily for another medium, are growing more innovatively into the digital space. Of course, we know that children who love a license/character/story are keen to engage with it across multiple touchpoints. However, the new perspective is not to just say ‘we’d better make an app’ (alongside the T-shirts and backpacks), but to really consider how digital is uniquely placed to broaden and strengthen the brand. Competing with big-budget games is largely impossible. However, many companies have found an educational focus in the digital space successful, whilst others have cleverly drawn in the story threads and characters to a digital often creative digital offering. Meanwhile, many companies first established as kids app developers, are diversifying out into toys, books, TV or beyond. It really is becoming an increasingly 360, intertwined, competitive world - but equally one full of opportunity.

In many ways the trends in digital often simply mimic those in the whole industry - As the idea of connected publishing takes hold and includes making additional media around the hub of the printed book available to readers.

What I have seen is that an industry supposedly always changing is in fact stable and slowly pushing forward.

These added extras to the book over the last seven years have included mobile app development on platforms such as Google and Apple app stores. Publishers working on a more interactive website format one that isn’t simply a rather boring catalogue of books publications and how these elements have offered more insight in stories and publishers via one the largest changes in the publishing industry - that of the reader and their increasing interaction with books, authors, events.

I would highlight recent developments in AR, for example as an interesting beginning for what may become a pleasing and different picture book experience. Using the books as a stepping off point in narrative fiction and the screen taking that story in different directions too.

Alongside this new area of technology we have seen a rise in what I would call standard forms of media such as video and audio and how building these libraries of content for publishers may provide the necessary revenue return that many have pointed out that has been lacking in previous digital projects in the last decade.

Speaking from my vision and experience as a critic of Digital Literature for Children, mainly focused in the communicative, evocative and poetic capacities of its works, I think that there are primarily two relevant movements in the contemporary production.

The first one, which considerably bothers me, is the overwhelming reappearance of the ‘edutaiment’ as a major creative framework within the kid’s media scene. The subordination of art and design under those educative and curricular principles that are pretended to be taught seems to me that should be a minority reality inside this new cultural reality, but quite on the contrary, it is, as it already was at the beginning of the 90s, the major cultural offering towards children. I think that children and young adults both deserve a quality digital offer able to introduce them to the possibilities of illustration, game design, narrative, poetics, etc. A connection that, of course, is indirectly educative, but that takes place from the complexity of the humanist vision, and not from a teleological dirigisme that already dwells in other spaces of their lives.

In the second place, and this particularly makes me happy, is that, after several failed attempts of mere literary digitalization from publishers coming from the world of books, the children’s cultural sphere is beginning to take other fields of digital native culture into consideration. Videogames keep growing as a medium and are progressively producing aesthetically brilliant works for children. The exploration of how to communicate game design to an infant audience not just to entertain them but also to help build them up as critical players, as artistic viewers and readers of their world is clearly perceptible in the indie game scene. This has resulted in wonderful works in recent years that prove the huge maturity of the medium when thinking not only what a child is but also what kind of culture they deserve. A nurtured culture all across its elements,, tending to the design of all its expressive layers (interactivity, visual conceptualization, sound and music characterization…), as well as to the thoughtful attention to its narrative and thematic designs, each time less and less patronizing and more consistent with the evolution of today’s children’s and YA’s art.

GREAT APPS FOR KIDS AT HOME

A focus on the 2020 Dust or Magic Masterclass