BIB Grand Prix winner Hassan Mousavi describes the idea behind his Illustrators Annual cover. A talk about technique and inspiration.

The Illustrators Annual is a unique volume featuring all the selected illustrations, jury comments and special contributions of the yearly BCBF Illustrators Exhibition. A source of inspiration for publishers, illustrators and illustration enthusiasts alike, the Annual is further enhanced by an exclusive cover illustration, created every other year by the winner of either the Grand Prix Biennial of Illustrations Bratislava or the H. C. Andersen Award in the Illustrators Category.

2020 is Hassan Mousavi's year. The Iranian illustrator and painter is the winner of 2019 BIB Grand Prix with the book The Boxer.

BCBF interviewed him about the great work behind this year's Annual cover, his favourite techniques and tips to share with the illustrator community.
Hassan’s solo exhibition can be visited online on BCBF Galleries.

Would you describe the idea behind the Illustrators Annual’s cover?

The story of the cover begins with a sunrise and the appearance of a town that recalls the classical architecture of Italy. It’s a town that hosts fictional characters from East and West and from various cultures of the world. The magnificent day closes with the sunset on the beach.

How did you come up with the idea behind the Illustrators Annual's cover, and how did you choose the techniques that would best render it?

To achieve an idea, I imagine for a long time and play with everything in my mind. The world is an artist's toy. In my mind the most daring events can happen.

The city of Bologna is a city with a classical structure hosting a cultural and artistic event. The picture seems to be the Bologna festival, and children's book characters from diverse cultures from all over the world are the guests.

The material I use is generally acrylic on wood, but due to the size and stretch of the cover, I used canvas this time because wood is fragile. In my illustrations, acrylic paint is a controllable material for me, and the combination of acrylic and canvas was a satisfying experience.

What techniques do you usually use? Do you prefer one particular technique?

As I said, I usually use acrylic on wood panels in illustration, and I use oil paint on canvas to paint, but sometimes there are also traces of pastel, pen, marker, etc. In fact, I don’t prefer one technique to the others. What’s important to me is which techniques will make the idea more successful.

Would you describe to a young illustrator how you work and what your method is? How do you approach and work on new projects?

The most important tool for me is courage and imagination along with the years of experience I've gained. Before work, I imagine for a long time. Everything is possible in my mind, and finally, I start drawing the spaces and characters created in my head, and depending on them, I choose the technique and type of colouring.
In my recent works, I have become more relaxed. Nature has become more important to me and I enjoy drawing trees immensely. I make friendly connections with my characters; clouds are very valuable to me. I boldly exaggerate the proportions and structure of space. And I examine the shadow and light much more in my work.

Do you have any favourite artists who inspire your art and your style?

Over the years, many artists have impressed me, including Květa Pacovská, Brad Holland, Saul Steinberg. Also, the movies of directors like Darren Aronofsky or Christopher Nolan can be inspiring, and even blues music and pop art. Sometimes though it may be a wavy sea or the wind blowing through a duck’s feathers. 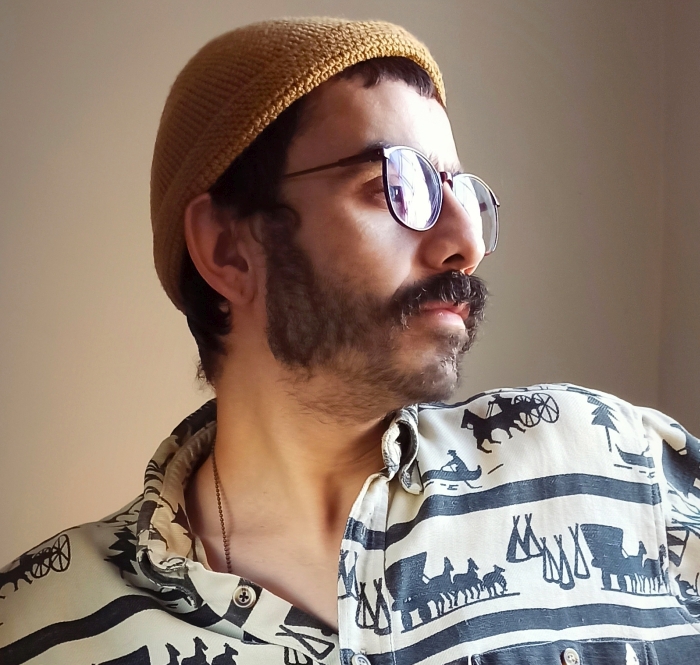 Everything is possible in my mind, and finally, I start drawing the spaces and characters created in my head, and depending on them, I choose the technique and type of colouring.

Hassan Mousavi (Iran, 1983) is an Iranian painter and illustrator. Hassan was born into a middle class family in Qom. From childhood, he started working in his father’s forging plant. Small pieces of different shaped iron were his first characters for his illustrations; drawing and creating super-humans who would save the world, was his hobby as a child. Mousavi was expected to continue in the family business but his interest in graphic design took his life in a different direction. Illustrating was one of the classes he most enjoyed and illustration soon became a major interest. He continued his education in graphic design at Shahid Beheshti University in Karaj. He was inspired by Farshid Mesqali, Keveta Pakovska and Stepan Zavrel. Mousavi has illustrated more than 40 children’s books for different publishers in the world. His artwork has been displayed in Iran, Germany, Denmark, Japan, the Czech Republic, Slovakia, Italy and the UAE. His illustrations were selected for the 2013 Illustrators Exhibition of the Bologna Children’s Book Fair. In 2018 he received the honour diploma from the Children's Book Council of Iran (IBBY-Iran). The Boxer, written and illustrated by him, was included in the White Raven List in 2018, and he received the Grand Prix BIB - Biennial of Illustration Bratislava for the book in 2019. The Boxer uses words and pictures to familiarize children with peace culture, its dynamic images carrying a profound moral message.