BCBF: the story of a logo

How those two children reading a book have gone digital 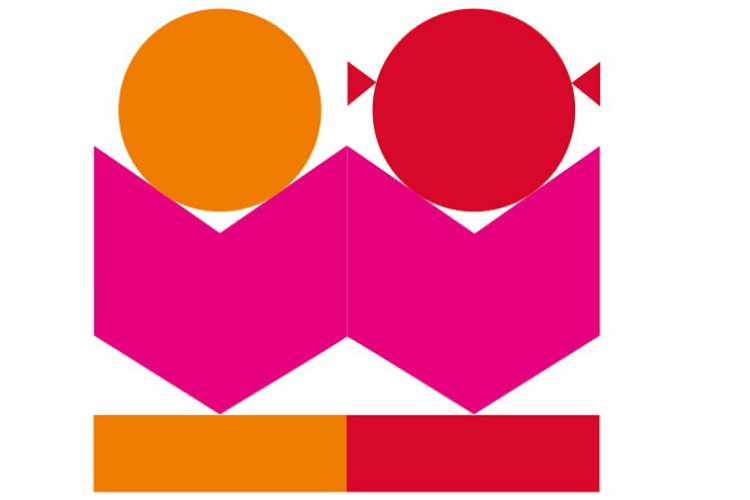 With the Online Special Edition, Bologna Children’s Book Fair’s logo has also undergone radical change. Although the three original colours – orange, red and magenta – have been kept, the unmistakable stylised form of a boy and girl reading a book, that for more than 50 years have symbolised the Book Fair, has been revised.

While the new visual identity is now changing each year under the curatorship of Chialab Design Studio, in partnership with the artist chosen from among those selected for the Illustrators Exhibition, the book fair’s first logo – the universally recognised symbol of the BCBF – had remained practically unaltered since first designed.

From Giovanni Lanzi to Beppe Chia

The creator of the Fair’s first, brilliantly simple, logo of two children reading was Giovanni Lanzi, the graphic designer chosen by BolognaFiere, who from 1969 onwards developed the historic logos of other Bologna tradeshows such as Arte Fiera and Motorshow.

Mauro Felicori, Councillor for Culture and the Landscape of the Emilia-Romagna Region, remembered Lanzi like this:

“I met Giovanni Lanzi almost at the end of his career. It was in the late Nineties when, as well as head of Mayor Vitali’s Cabinet, I was General Manager of the project Bologna City of Culture 2000. He was without doubt one of Italy’s best graphic artists. I had seen and admired so many of his works, but had never seen them as the work of a single artist – or perhaps I should say craftsman. Although ‘craftsman’ is better suited to his style, it’s not what you’d expect from a graphic communications expert. Just like many, admittedly secondary, details. First his studio: no historic city centre or loft location, rather an unpretentious apartment block in the anonymous suburb of Pontevecchio, the sort of place where you’d find a national health doctor’s surgery. His appearance too, lacked eccentricity: no fashion items, dark glasses or trendy shoes, but quietly elegant clothes in subdued colours that passed unnoticed - quite the opposite of his drawings. He affected no marketing pose. He didn’t do client seduction, sales pitches or speak about ‘accounts’. He simply presented himself in person, smiling and willing to listen during lengthy briefings to fully grasp his client’s wishes. He didn’t speak much, only to ask questions to fully grasp the aims of the job. Words he used sparingly; his drawings spoke for him. But then, that’s what graphics is all about: images that speak - tell stories - taking less time than the written word. When he returned with his ideas, it was always pure pleasure to see his new inventions.

In his studio I saw many of his works that I no longer remember: so many logos for companies, packaging plants or coordinated graphics. So much work. So many ideas; vibrant colours; decisive lines. And never was there a superfluous stroke, an over-aesthetic flourish, something that had no reason to be there. There were no fancy trimmings, no white spaces. What remains alongside our indelible memory of Lanzi is his work, which deserves an exhibition and catalogue in itself. Lanzi’s creations should be organized and made available to stimulate creativity in young people today and teach them how to add to the world’s store of quality.”

(from Bologna — Fifty Years of Children’s Books from Around the World, Bologna, edited by G. Grilli, Bononia University Press, Bologna 2013)

“I never knew Giovanni Lanzi personally, but in 2009 we inherited and took into our studio one of his assignments: the Bologna Children’s Book Fair’s brand. It now comprises three flat colours, two circles, two triangles, four rhombuses, and two rectangles: a girl and boy and two books: iconic, simple, effective, functional and recognisable.

It’s easier to design a new brand from scratch than inherit one that for more than half a century has crystallised the values inherent in Bologna Children’s Book Fair. Carrying it along but developing it has been, and still is, a tough but fascinating challenge.

In 2009, the logo was not backed up by a clear-cut set of indications and principles. So the first thing we did to ensure its safeguard as a protected visual image was to study all the ways it was used, describing and codifying all its various applications.

That was how the BCBF brand handbook came about. It safeguards the brand from all inappropriately extended interpretations that could come about given the deliberate simplicity of the design.

Although a brand handbook may seem an arid bureaucratic exercise, it has been fundamental, allowing us to fully understand not only the colours, composition and typographic elements but also the brilliantly devised visual variables – those ineffably priceless strokes that give the brand value, significance and recognition.

In 2017, it was decided to break this graphic design-illustration taboo and involve young Illustrators Exhibition in the development of the Fair’s yearly visual identity. As a result, graphic designers and the illustrator of the year joined forces in an intense hands-on workshop. In 2017, the young illustrator was Daniele Castellano; in 2018 it was the turn of Chloé Alméras, then of Masha Titova in 2019, and Rasa Jančiauskaitė in 2020.

The challenges involved in bringing into being Bologna Children’s Book Fair’s visual image continue. The pandemic will change our relations, increasing the distances that separate us. Our challenge is to shorten those distances. All our energy will be dedicated to enhancing the digital tools and environments to make people feel at ease and in close contact with one another.

The Bologna Children’s Book Fair brand will continue to catalyse the different visions of the event around the world. Born for a paper-based world, BCBF’s corporate identity has now been transformed into an effective, dynamic digital design system, now that certain services, especially content, can be enjoyed online.

Our aim is to shorten distances by making the brand, services and products of Bologna Children’s Book Fair accessible, user-friendly and fun.”