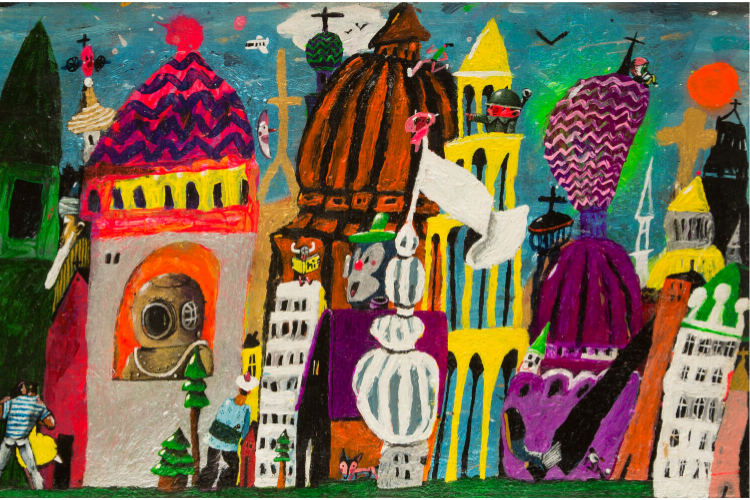 An inspirational source for illustrators, artists, designers, and art fans, the Illustrators Annual is a must-have publication collecting the artwork featured in the annual Illustrators Exhibition. This large catalogue brings together great art from around the world, providing a fascinating glance into children's book illustration.

Following a consolidated tradition, the Annual’s cover is created by the winners of the Hans Christian Andersen Award and the Grand Prix of the Biennial of Illustrations Bratislava, alternating between the two prizes.

The 2020 Illustrators Annual cover is illustrated by Hassan Mousavi (Iran), winner of the 2019 Grand Prix - Biennial of Illustrations Bratislava.

In this post, Ali Boozari (Tehran University, Iranian Society of Illustrators) talks about the creative world of Hassan Mousavi and his book “The Boxer”.

Hassan Mousavi (1983) is an Iranian painter and illustrator who has spent many years creating works of art. Exhibited around the globe, his works have been praised by audiences and critics alike. In 2019, he won the BIB Grand Prix with his book The Boxer (TUTI Books, 2017). Hassan is the cover illustrator of the 2020 Bologna Children’s Book Fair Annual, and a virtual exhibition of his works is now featured in the BCBF Galleries.

Previous generations of Iranian illustrators adopted this art form, experimenting according to their own tastes and talents, and laying the foundations of contemporary Iranian illustration. Having participated in many workshops and courses, Hassan Mousavi belongs to a generation of Iranian illustrators with a firm grounding in the science of illustration and the academic principles of this art form. His talent and perseverance led him to develop a unique style rooted in Iranian visual culture that captivates the public of today. But Hassan is not just a painter of beautiful images and masterpieces worthy of a museum. Rather in his books he seeks to evoke contemplation, reminding his audience of moral and human values.

Hassan began his career as the illustrator of Pedarbozorgam Khādem Ast (Behnashr, 2006). In his early works, he portrayed small characters, extensive vegetation, and lovely colourful houses on a white background, the contrast between the colourful elements and the white background stimulating the reader’s imagination and creativity. His painterly illustration style gradually changed into more succinct stylized forms, and simple lively designs. Colours leaked out of plants, humans, animals and buildings to spread throughout the illustration. The result is painterly-framed works in eye-catching appealing colours.

The Boxer, the 2019 BIB Grand Prix winner, is a picturebook telling the story of a successful boxer. Going from city to city, he wins every competition and is praised by everyone, becoming a prime example of a successful man - famous, rich and popular. However, in the middle of this passionate and exciting journey of fame and popularity, he stops and contemplates. The gloves his father had given him have gradually worn out, and the hearts his mother embroidered on the gloves have almost faded. This is the beginning of his return to the past and self-contemplation.

The boxer continues travelling and punching, but this time he punches the mountains to pave the way for a road, to calm the seas for the fisherman, to prepare the farm for the farmer, and soften the dough for the village woman.

At the end, when a boy asks him to teach him how to punch, the boxer says: “Lesson number one: Before you ever raise your fist, you must always first think about where your punch is going to land.”

Mousavi makes use of his painting skills to create illustrations whose riot of beautiful, contrastive colours are a pleasure to the eye even if the reader does not recognize the shapes.

His works celebrate nature. They speak of thick forests swaying in the wind, the roar of the waves on the sea, the magic of a bright silver moon in the vast sky, and towering mountains. Humans and animals are just a tiny part of his world, hidden among dense trees and magnificent colourful buildings. In Hassan’s world of illustrations, man is not only the creator; he is also the destroyer. He is not only a builder but something that has been built, not only active, but also passive. All readers recognize themselves and their lives in his illustrations, and easily identify with his heroes.

The Boxer is a book in praise of thinking, contemplation, and moving forward. It is the story of a famous boxer with a small head who at first only thinks about boxing and being successful. But he soon realizes there is a void in his life: he lacks humanity and purpose. He silently asks himself: Why am I punching? What do I do with my fists? How do my fists help humanity?

We live in a world burdened with great crises. Every day we see and hear of unpleasant news from around the world: floods, earthquakes, famine, drought, disease, war and slaughter. Human beings have shamelessly enslaved and sacrificed other humans, animals and nature for their own self-interest, creating a world that will gradually leave no room for human life. It is difficult and impossible for today's urban children to understand the small joys of our childhood, such as group games, walking in nature, and freedom, for soon all these joyful activities will disappear. The message of The Boxer is a plea for what we need most in today's world: peace; to be at peace with ourselves, with people, with nature, and with the world.

As well as a story for children, the Boxer reminds us that humans in the 21st century need to learn peaceful coexistence, empathy, mutual understanding and friendship more than ever. The Boxer is the story of today's humanity: a human being who has forgotten the purpose of gaining power, considering himself the undisputed owner of the world, just punching and advancing. It seems that now is the time for man to pause a moment and look at what he has left behind and what lies ahead, and plan his future anew according to his strengths and weaknesses.

Now that all the equations and plans of the world have proven false in the wake of the current pandemic, and all the supremacy and wealth of the powerful nations have proved ineffective and impractical, we must remember the first lesson: “Before you ever raise your fist, you must always first think about where your punch is going to land.”

The message of the Boxer is exactly the one we need most in today's world: peace; to be in peace with ourselves, with the people, with nature, and with the world