“Mapping”: a project for children-oriented theatre 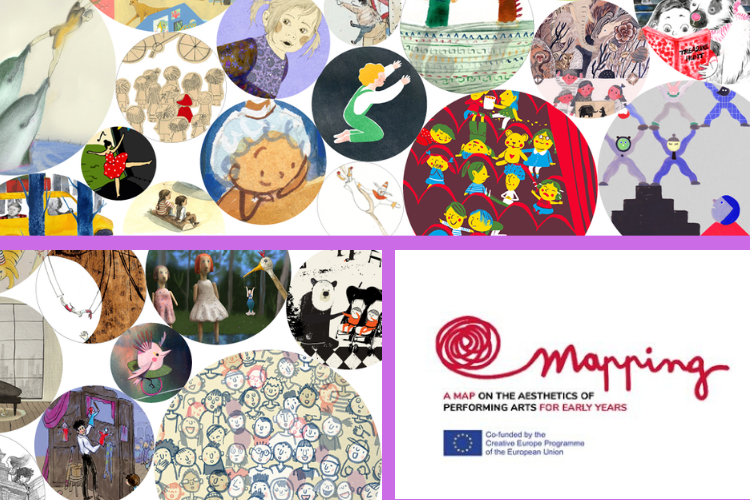 The Bologna Children’s Book Fair is always open to exciting new projects involving the arts and illustration. One of these is ‘Mapping - A map on the aesthetics of performing arts for early years’, a four-year project supported by the European Union.

This artistic research project into very young theatre audiences (age 0-6) investigates the interaction with artistic performance - theatre, dance, or music. The aim is to create a Map of the sensitive relationship between young children and artists, and so produce children-oriented theatre.

Mapping involves both academics and artists. Researchers are tasked with identifying specific recurrent elements in the way children of different ages watch and listen to a show. The artists – both performers and illustrators – are called to reinterpret the concept of the child spectator.

The partnership involves 18 partners from 17 European countries: theatres, institutions and artists that have established a deep relationship with very young children over time, and are willing to offer their specific know-how to this research project.

The project was launched in 2019 with the first edition of the illustration exhibition ‘The Children-Spectators’: 31 illustrators were selected by a special jury and exhibited at the La Baracca - Testoni Ragazzi, Theatre for Youth in Bologna, Mapping’s project leader. For the 2020 edition, the selected illustrators were exhibited virtually in the BCBF Galleries section of the Book Fair’s website.

The project also involves four internationally renowned artists who reinterpret the concept of children spectators. They are Katsumi Komagata (Japan), Manuel Marsol (Spain), Fabian Negrin (Argentina) and Klaas Verplancke (Belgium). Their artworks will be the centrepiece of a special exhibition to be held at the end of the project, together with the best illustrations coming out of the four-year illustration competition.

We asked Roberto Frabetti, founder of La Baracca - Teatro Testoni Ragazzi, the Mapping project leader, and Anna Sacchetti, Mapping’s promotion and management coordinator, to tell us more about this project and its development.

The Mapping project is already in its second year. How is research progressing, especially at the Testoni Theatre?

Roberto Frabetti: All the project activities took part as planned during festivals, thanks to several partners. In 2019, each event took place in a different city: the first in Bologna, then Salzburg, Limoges, Breda and Ljubljana. That’s where the four project working groups (Image, Sound, Word and Movement) met, and that’s where several of the Working Groups’ activities took part. It was a great environment for workshops and shared reflections. Participants pooled past and present experiences and laid the foundations of a co-production approach, at the end of which each partner developed a thematic idea to be the starting point for a new production.

Hopefully by 2021, 16 children-oriented shows will be written, and a series of “open questions” (basically, invitations to actively take part) will also have been formulated. We’d like to involve anyone actively interested in children-oriented theatre. The idea is to create a map of 32 questions about the sensitive relationship between artists and children. This will be the basis for the research to be continued through to the end of the project, when it will be argued and illustrated graphically. The map is like a puzzle whose many different pieces will slowly be put together.

The working groups were supposed to meet again during 2020, but COVID 19 pandemic inevitably changed the project structure. Despite this, we’re confident that the foundations established during the first meetings, together with the partners’ experience and professionalism, will allow everyone to continue independently along the path set out.

At the moment, we can still only work remotely, in compliance with the rules of the different states. One day we will start travelling again, but in the meantime we continue to work on the first questions already identified as key topics by the project researchers. In fact, the first images have already been received from the four “Big” Illustrators of the project: Katsumi Komagata, Manuel Marsol, Fabian Negrin and Klaas Verplancke. This is an important step forward. After that we will start work as soon as we are allowed and it’s safe to do so.

And what about the European partners? How’s their work going?

Anna Sacchetti: Our partners have been really responsive, right from the start, each according to their own characteristics and sticking to the timeframes set.

Some have already hosted project activities at Mapping festivals organized by them in 2019, while others have coordinated research group work. Some (like the Book Fair) have done an important job as intermediaries with the world of illustration and children's literature. During the project’s first year, all the partners took part in at least two festivals, the first workshop for the groups engaged in artistic research on the map, two management meetings, and a seminar on directing and dramaturgy. Many partners have already started the production process that will lead to the writing of 16 new children-oriented shows (age 0 to 6): some of these shows are supposed to debut by the end of 2020. Of course, the current international situation abruptly stopped all 2020 plans, but we are confident and ready to start again as soon as possible.