An Interview with Massimo Missiroli and Matteo Faglia 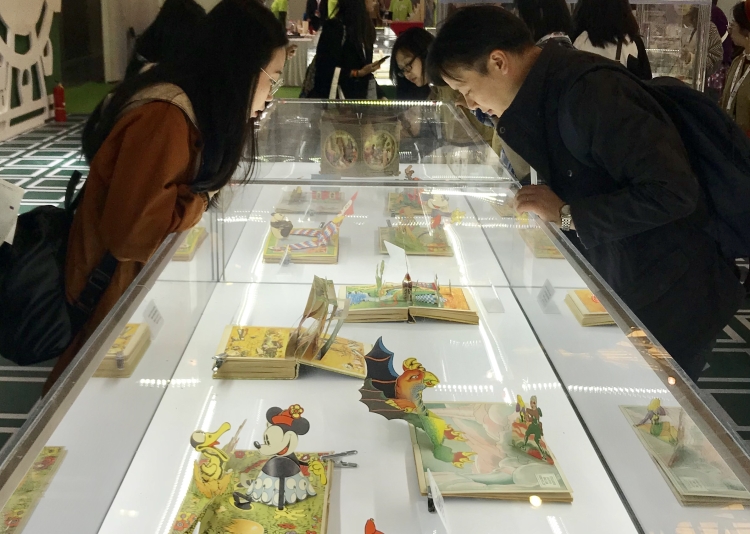 Pop-up books have always captured the imagination of children and beyond, precisely because they’re both books and engineering masterpieces. Back in 2019, at the China Shanghai International Children's Book Fair, the exhibition and related conference “Tabletop Magic - The Art and Theater of Pop-up Books” have been completely focused on pop-up books.

We asked both Matteo Faglia and Massimo Missiroli, the exhibition curators, to tell us more about it!

What’s the state of the art regarding pop-up books in the Chinese and, more generally, Asian market?

Since 2000, the international production of pop-up books has shifted completely to Southeast Asia (in particular to China) where the most important printing and assembly companies are now located.

In the last 20 years, the paper industry has changed a lot. It has become more complex and the know-how of Chinese firms has been able to follow the best paper-engineers, who have created spectacular pop-up books.

In recent years, a Chinese school of new artists has also developed. They have created books so amazing to match the work of American paper-engineers such as Robert Sabuda and Matthew Reinhart, both known for their highly sought-after ability.

Are there any differences between the Eastern and Western markets?

Since the 1970s, the pop-up market has become a global market. Most books are published in multiple countries and in different languages. The Chinese reader, therefore, happens to browse the same pop-ups that browse American or European readers. However, there’s also an interesting Chinese production for the domestic market, with very creative authors and paper-engineers who “work” on themes and topics more related to their country’s culture.

We are unable to know how much the pop-up book has penetrated the sale of children's books and how widespread it is in Eastern markets. Certainly in the Western world, even for a history of at least 150 years, it has spread widely. Today, even the smallest publishing houses offer books of this kind.

Would you like to tell us something more about the collection presented in Shanghai?

In the Shanghai exhibition, as is customary in our POP-UP SHOW, a historical journey from the end of the 19th century to the production of recent years has been proposed, with the absolute novelty of a section of pop-up books published, at the moment, only for the Chinese market. Finally, there’s been also a world premiere of a book on Bruno Munari by Corraini editions, not yet on the market at the time.

For the section of contemporary books, some of the most interesting books published in recent years have been chosen, many of which have been selected and awarded with the Meggendorfer Prize of the Movable Society. In total, 130 titles have been exhibited.

These books are all unique pieces in their own way, but is there any of particular interest compared to the others?

Among the most interesting books we can certainly identify the books of the 19th century, in particular those printed by Ernest Nister in London, which were exported by E.P. Dutton in the United States. In addition to these, the "Pinocchio with pop-up illustration" of 1932, the first book where the word pop-up appears. Another title is "Andy Warhol index book", the pop-up book created by the great American artist for Random House in 1968. Among the Italian books we point out "Ali Babà and the 40 thieves", published by the Hoepli publishing house in 1942, for which the authors have used the carousel construction with 6 openings in a spectacular way, creating very complex scenarios. Finally the aforementioned preview, "Munari's travel sculptures" published in 2019 by Corraini and created by one of the greatest contemporary paper-engineers, the American David A. Carter.

Massimo Missiroli was born in 1957. Since 1978, he is a collector and scholar focusing on pop-up books. His collection boasts around 4,000 books. In 1997, he started designing pop-up books as a paper engineer. He specialises in creating pop-ups based on already published book with flat pictures. His Pinocchio pop-up book published in 2002 received several awards and was selected by the Movable Society as one of the most beautiful titles published in 2002-2003. Between 2009 and 2010, he created five other pop-up books, which have been published in China since then.

Born in Milan in 1951, Matteo has worked for more than 30 years in the world of children’s books publishing, starting with his own firm called Fatatrac, and then continuing as editorial director for two important Italian publishers: Giunti and De Agostini. From these important industrial-cultural experiences he has accumulated knowledge and competence that he uses as a consultant for different clients. He has always been enthusiastic about pop-up books and has produced several pop-up books designed by foreign and Italian paper engineers. Together with collector Massimo Missiroli, he organises and manages the exhibition POP-UP SHOW which has been travelling all around the world.