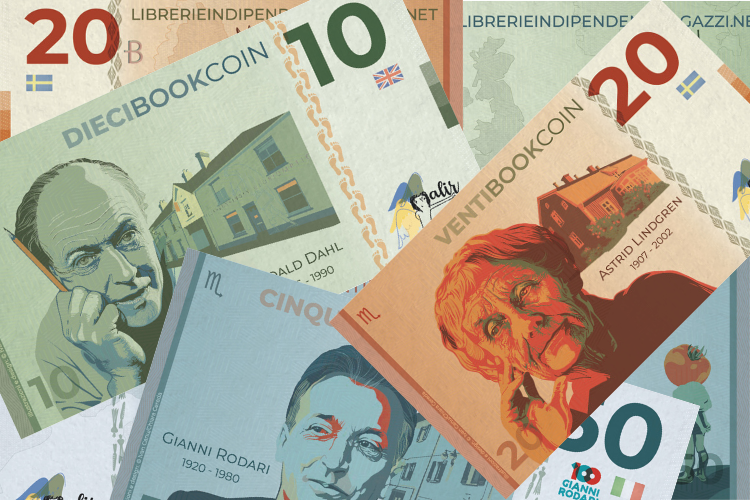 Bookcoin is a project developed by ALIR, the Italian Association of Independent Children's Bookstores, in cooperation with Accademia Drosselmeier, the historic school for booksellers and a research centre for children's literature. This new currency, displaying the portraits of the most famous children's books, aim to encourage the young readers to visit bookstores and frequent them regularly.

These banknotes showing Gianni Rodari, Roald Dahl and Astrid Lindgren should make children feel more confident about entering a place that is “just for them” and, above all, free and autonomous in their own choices.

“In all the bookstores that will adhere to the Bookcoin project – says the Italian writer Nadia Terranova (Il Foglio, Saturday 18th April) - the members of this section of society will be able to pay in their own special currency, and instead of waiting for their parents to open the wallet and take out the money, they will go straight to the cashier even though they hardly reach the counter top. A symbolic gesture, strong and bright. As for the adults, each time they pick up a Bookcoin bill carrying the image of authors who made great children's literature great, they will be forced to remember that children's books are one of the most deadly serious thing in the world. And maybe – who knows? - they might even receive a handful of rodarian earfuls for change, one for each time they have forgotten it.”

Ivan Canu, Ivan Canu, Director of Mimaster Illustrazione, draw the banknotes for this project: “When I was a child, one thing that I used to do at bedtime was to listen to my sister reading aloud a book and playing its characters' voices. My favourites were Emil’s stories with hen Ciuncalotta and the old Tata Marta, the spectacular adventures of Pippi and “Fairy Tales Over the Phone” by Rodari and illustrated by Munari, in particular the story of King Midas “cow-shit” that we read over and over again. During those nights, alone in the room, under the light of a world-map lamp it came true what Rodari says about fairy tales: they are the place for hypotheses, they give us the keys to go into reality through new roads. When Grazia Gotti and ALIR asked me to design a currency conceived for children and dedicated to the authors who have shaped my imagination, I visualized them as banknotes printed by a creative but scrupulous mint. They shouldn’t be childish just because intended for kids. With Chiara, who did the graphic design, we studied all the details: the use of contrasting colors with one tone that recurs in the other banknotes, the insertion of elements from the birthplace of the authors, the scene from their best-known books, their zodiac sign and the nationality revealed as watermark, the vertical overlaid graphic pattern linked to the illustrated characters on the back. This currency should give children the same power as the real money used by adults to buy food, clothes and toys. I imagined it as I would have liked it as a child, in my small wallet: concrete, powerful and accepted by adults in return for some books. Since a large part of the economy is destined to children, giving kids a tangible symbol of their importance is a way to invite them to take part in the world as protagonists. That world that they live in and that they celebrate every day with their brilliant and inexhaustible creativity. To those who might say: “what are children going to do with money, and fake money on top of it all?” I would reply quoting Pippi Longstocking: “I have never tried that before, so I think I should definitely be able to do that”.

This currency should give children the same power as the real money used by adults to buy food, clothes and toys