A brief history of the BolognaRagazzi Award (BRAW) and a focus on the collection of the prize-winning books hosted by the Salaborsa Children’s Library in Bologna. 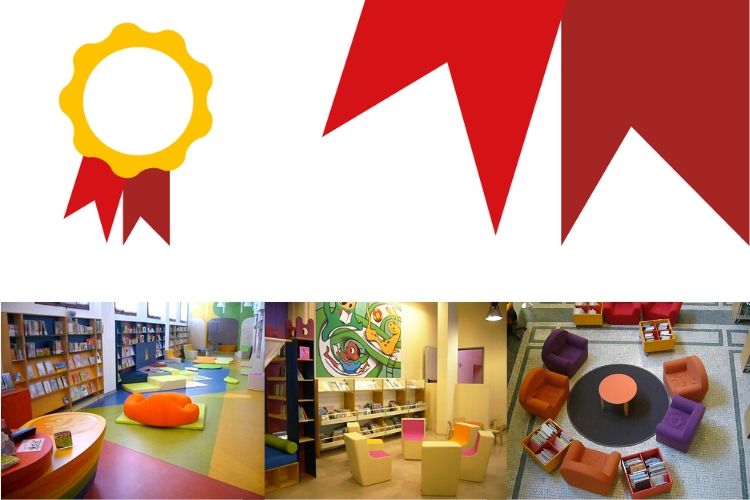 The Bologna Children’s Book Fair first opened its doors in 1964. Down the years it has become widely recognised as the key international event to get a first-hand understanding of ongoing experimentation that will drive future developments in children’s book publishing.

The very first edition of the fair in 1964 established two prizes for children’s books: the Balanzone d’oro for the best literary works and the Torchio d’oro for graphic excellence.

These first two years were pilot editions before gearing up to the intentional event the fair was to become. The international character of the trade show called for the cancellation, in 1966, of the two prizes which were mostly domestic in their reach.

Starting in 1966, the prizes awarded by the Bologna Children’s Book Fair entered a new season with the Premio Grafico/Graphic Prize Fiera di Bologna, acknowledging the best graphic work of a book as a whole, and the Critici in Erba Prize (Young Critics Award) which was awarded by a jury of children. The winner of the first Graphic Prize that ushered in this new phase of the fair was Gesù oggi by Anonymus Bolognese, alias Wolfango, whose 60 plates told Gospel stories in a modern key. During those early years, prizes or mentions were obtained by illustrious creatives such as Eric Carle for 1,2,3 ein Zug zum Zoo/ 1,2,3 to the Zoo  (1970) and Die kleine Maus sucht einen Freund/Do You Want to be My Friend? (1972), Quentin Blake for Patrick (1969), Mitsumasa Anno for Zwergenspuk (1972), Tomi Ungerer for Der Zauberlehrling/The Sorcerer’s Apprentice (1972), Lisbeth Zwerger for Das fremde Kind/The Strange Child (1978).

The awards changed with the times and new strategies were developed to encourage publishers to participate. 1983, saw the start of the international juries with all famous names willing to put themselves on the line as jurors in this international children’s book competition. Internationalisation was a strategic choice and allowed the fair to make a leap forward. The steady growth of books entered by publishers speaks for itself. Asian countries became assiduous participants and countries like Portugal, China, Greece, Mexico, Venezuela, Albania, Ghana and Lebanon started to send their books in the 80’s.

The BolognaRagazzi Award (BRAW), the prize still given by BCBF, was started in 1995. It was a true sea change. The new award not only aimed to keep abreast of the swift and far reaching changes underway in children’s publishing but also gave a new boost to the award itself. By combining aspects that had previously been considered separately with the two awards, the new BRAW acknowledged the overall quality of a book comprising many elements: graphic and formal excellence, but also semantic and communicative ability.

In the last few decades the BRAW has consolidated its prestige as a premier international award with many non-European and emerging world publishers entering books. Each year, the BRAW receives around 1,600 titles from publishers all over the world. 2020 marked a record edition with 1,888 books submitted from 41 countries worldwide. Down the years there have been more than 1,000 prize-winners and mentions covering an exceptionally wide range of different graphic, editorial, language and narrative characteristics.

“The Salaborsa Library is Bologna’s main public reading library. Managed under the municipal Library Institution, it has a broad collection of children’s books stored in ample spaces. The library is strategically located in the centre of the old town in the main square, which for more than a thousand years has been the beating heart of the city.

The children’s library contains over 80,000 documents. Taking pride of place are the 1910 volumes making up the collection of BCBF prize winners from 1966 onwards. Created thanks to the commitment of both the library and the Bologna Fair, the collection includes the winners and mentions of the Graphic Prize, the Critici in Erba Award and the current BolognaRagazzi Award. Two copies of each volume are held and available for consultation.

The collection is the pride of the library on many counts. Firstly, it is tangible proof of the city’s admirable ability over the decades to place literature and cultural activities for children at the centre of its policies. The pages of the books also bear witness to the many people in the city who both yesterday and today have put their intelligence and passion to the service of promoting reading, literature, illustration and children’s publishing. The collection also testifies to the city’s open-mindedness towards the wider world, its willingness to embrace different visions, multiplicity and nuances; it is an intimate account of the past that substantiates what we are today and what will shape our future.

The library is tasked with making this valuable resource available to the public as a means of furthering investigation, study and interest on the part of young and old alike.

All the books can be consulted in the library. On our website, the cover and references of each book are also visible. Each volume is listed under the year in which it won a prize or mention, alongside a list of the jury members of that year. Since 1995, the reasons given by the jury have also been included.”

Take a look to the BRAW’s collection here