An interview with Cathy Olmedillas 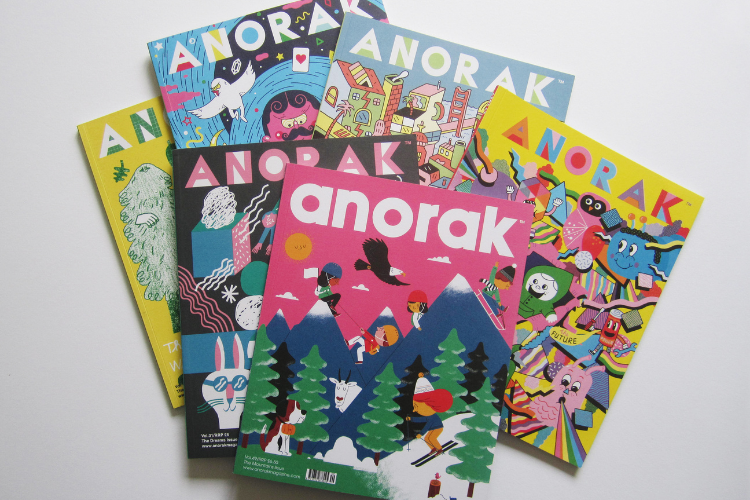 Aimed at young readers aged between 6 and 12 years old, Anorak is internationally-acclaimed as "Happy Mag for Kids", one of the most successful children’s magazines.
In its 15th anniversary, we talked with Cathy Olmedillas, founder and creative director of The Anorak Press, publishers of Anorak Magazine and DOT, an independent children's publishing house established in 2006.
Long-standing friend of BCBF, Cathy was one of the jurors for the 2020 Illustrators Exhibition and we saw her amongst the discussants of the Open Up masterclass "Inside the Kid Magazine".

When did Anorak get started and how did the idea come about?

I started Anorak back in 2006 (15 years ago!!) because I had become a Mum and couldn’t find a magazine that I wanted to buy for my then- 4 year old son. I had been working in publishing for a while and wanted to launch my own. It’s when I realised how poorly-served the children’s magazine market was that I thought ‘there’s your opportunity!’ I didn’t want Anorak to be another kids’ mags that families throw away after reading it once so I took inspiration from books and annuals I read in my childhood. I made a dummy version that I took to distributors, who advised me against it, as they thought a unisex magazine would never work. I am glad I never listened to their advice! Instead I went directly to shops and I used the internet to spread the word.

Which are your biggest achievements in these 15 years?

I think if I had to choose one achievement, it would be that we have managed to last 15 years. Despite all odds! It’s not easy launching something that is so different but launching is one small step. Lasting is even more difficult and I have learnt that there are many different ways to run a business. My second proudest achievement is the number of illustrators careers we launched. That’s the best feeling to see someone who we gave their first assignment to developing their career.

Finally what I am most looking forward to is launching our first book imprint! It is called Paper Turtle and we are looking to publish books that have joy and creativity at their hearts.

It’s been so much fun to put together, especially as it was recorded during the second lockdown we had here in the UK at the beginning of the year. The concept is we get our Little Editors to send us questions about a particular theme and we find the best experts to answer them. There are also a lot of jokes, again all sourced and told by our little readers. It has been so nourishing to learn how mushrooms are used now as construction materials, how whales pee or whether rock stars forget their words on stage. The response has been amazing (over 5,000 downloads now and still going) so we are looking at launching Season 2 in January. It will follow the same format but we will add some more creative things into it!

Mostly online from our shop. We also have a handful of independent stockists around the world, which you can see here. In Italy specifically, Reading Room in Milan and Edicola 158 in Perugia are loyal stockists.

Cathy Olmedillas is the creative director and founder of Studio Anorak, publishers of "Happy Mags for Kids", "Anorak" and "DOT". In 2006, she launched the internationally-acclaimed "Happy Mag for Kids", Anorak when she couldn't find a fun, educational and collectable magazine to read with her son. Studio Anorak went on to launch a family-focused content agency producing pieces of communications for brands such as Airbnb, H&M and Pottermore amongst others.

Anorak Magazine
The Happy Podcast for Kids
Inside the Kid Magazine