A walk through the BCBF online exhibition focused on reading, libraries, bookshops, writers and the book itself. 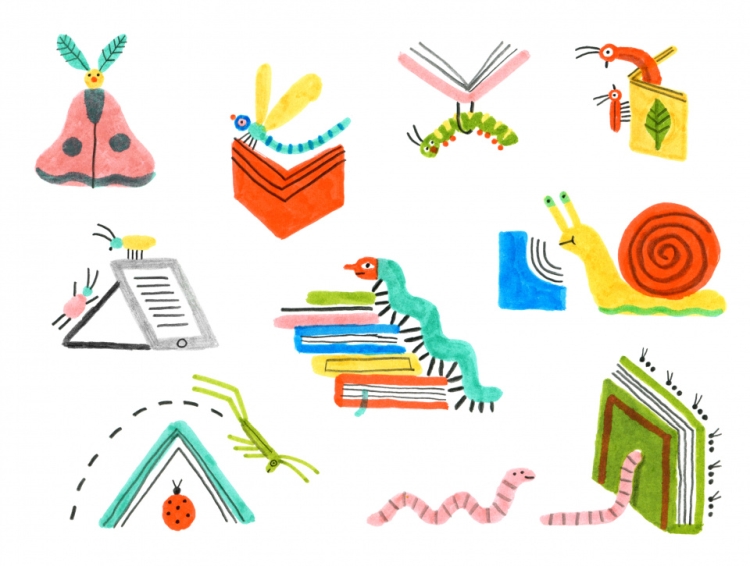 In recent years picture books on the subject of the book itself have flourished including stories of libraries, bookstores, publishers, activists, writers and pioneers.

"A UNIVERSE OF STORIES. Starring: The Book" is a special virtual showcase featuring picture books that BCBF has been collecting from across the world.

The exhibition was curated by Accademia Drosselmeier and ALIR – Association of Italian Independent Children’s Bookstores.

In this post, Grazia Gotti, from Accademia Drosselmeier, takes us through the books on show.

A Universe of Stories. Starring: The Book!

When booksellers discover books that speak about them or libraries, or authors, or the love of reading, they tend to get ecstatic. It’s not out of vanity or self-celebration but because very rarely do they find themselves cast as characters in the pages of colourful storybooks full of children, animals and dragons that speak, walk and fly. They are in seventh heaven. Publishers have realised this and begun adding books about books and the pleasure of reading to their catalogues. It’s happening all over the world with ever increasing frequency. Books on books deserve to be given pride of place as indeed Tate Publishing has done with the republication of Alessandro Sanna’s Castle of Books, first released in Italy by Franco Cosimo Panini in 2014. To keep the precious flame of reading alive and pay tribute to the history of children’s literature, Chronicle Books has brought out a title on John Newbery, the London printer who pioneered the industry of children’s book publishing. Who knows, we might even see a new edition of Goody Two-Shoes!

Anything can happen in the world of people who love books. Some have gone to incredible lengths, like Libros del Zorro Rojo with their publication in Latin and Castilian of the very first book for children with pictures - Orbis Sensalium Pictus by Johannes Amos Comenius – that gained a mention at the 2019 BolognaRagazzi Award. This wonderful volume was immediately taken to Taiwan by Locus, the publisher that in the same year won the Bologna Children's Book Fair’s BOP - Bologna Prize for the Best Children’s Publishers of the Year. Locus also published the funny but disconcerting book by Jimmy Liao, To Read or Not to Read, that asks the pertinent question of whether we should dream on or simply accept the fact that the book is dead.

Nor are libraries forgotten in this series! The splendid book published by the Canadian Owlkids celebrates Andrew Carnegie in The Man who Loved Libraries, which Carnegie certainly did, founding a large number of them. From an early 20th Century philanthropist we go to more modern times with Clarion’s impressive Little Libraries, Big Heroes and the story of the Free Little Libraries.

The accomplishments of super-heroes of the book business are also the stuff of several books, like the story of the heroic librarian, illustrated by cartoonist Vera Brosgol, who flies to the rescue with the right book at the right moment, defeating the malevolent creature intent on destroying all books on the planet.

Publisher Limonero gives us another story set against a completely different backdrop to present the work of the great Argentinian author Maria Teresa Andruetto, winner of the 2012 Hans Christian Andersen Award. In Clara y el hombre en la ventana, the masterful illustrations of Martina Track create a suspended atmosphere of wide open spaces where silence reigns, the backdrop to the story of little girl learning the joy of reading.

The story of another little girl who was to become the poetess Emily Dickinson is the subject of the splendid picturebook published by Chronicle Books and illustrated by Becca Stadtlander, whose use of tempera and watercolours evokes an atmosphere of the past.

The brilliant colours and strong personal style of two illustrators immediately catch the reader’s attention. Madalena Matoso, the much loved illustrator of the Portuguese Planeta Tangerina, uses her uncompromising colours in As maos e o livros, while the fluo colours used by Melissa Sweet to interpret the poetry of Alexandre Kwame in How to Read a Book are described by the illustrator as necessary “not just to convey how exhilarating and electrifying it can feel to read a book, but, as Kwame writes, to find the last drop of magic”.

The mix of the physical quality of books and the emotions that reading arouses come together to produce a delightful “distillate”, a sense of awe before so many wonderful books. The observer has the impression of discovering a new genre to be added to the usual book categories, like alphabet or counting books. This new genre could go by the name of Books on Books since it reveals the world of books. This is the aim of A Child of Books by Oliver Jeffers and Sam Winston in which they pay tribute to a long heritage of books from all over the world, and which gave Walker Books the 2017 BolognaRagazzi Award.

Alongside their unstoppable passion for books, booksellers are also inveterate collectors. They are a special breed, with an imaginary halo and wings, as the logo of their association recalls. Together they promote a stream of initiatives ranging from best book awards at festivals to meetings with young readers and teachers. The broader their experience, the wider is the range of books they stock, as is the case for Accademia Drosselmeier, founder of the Giannino Stoppani bookstore. 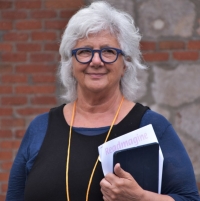 ...this new genre could go by the name of Books on Books since it reveals the world of books.

After she graduated in Pedagogy, in 1983, Grazia Gotti founded the Cooperativa Culturale Giannino Stoppani with a group of kindergarten and primary school teachers and educators. The Cooperativa runs an independent children's book store, organises illustration exhibitions and other events related to children’s books. Grazia Gotti currently collaborates with many publishers, scouting for books and curating book series. Since 2003 she is a member of the Board of Education of the Accademia Drosselmeier, a research centre and training school for teachers, educators, librarians and booksellers. Grazia is also the author of several books, including A scuola con i libri. Avventure di una libraia-maestra (Rizzoli, 2013);  Ne ho vedute tante da raccontar. Crescere con i libri  (Giunti Editore, 2015); 21 donne all'Assemblea (Bompiani, 2016). In 2019 she published her first picture book, Europa, illustrated by Daniela Stamatiadi (Edizioni Primavera).

TAG: BCBF20
back to previous page

A Universe of Stories. Starring: the Book
https://galleries.bolognachildrensbookfair.com/
Accademia Drosselmeier