Maurizio Quarello talks about the picture book featured in the BCBF online exhibition A UNIVERSE OF STORIES - Starring: the Book. 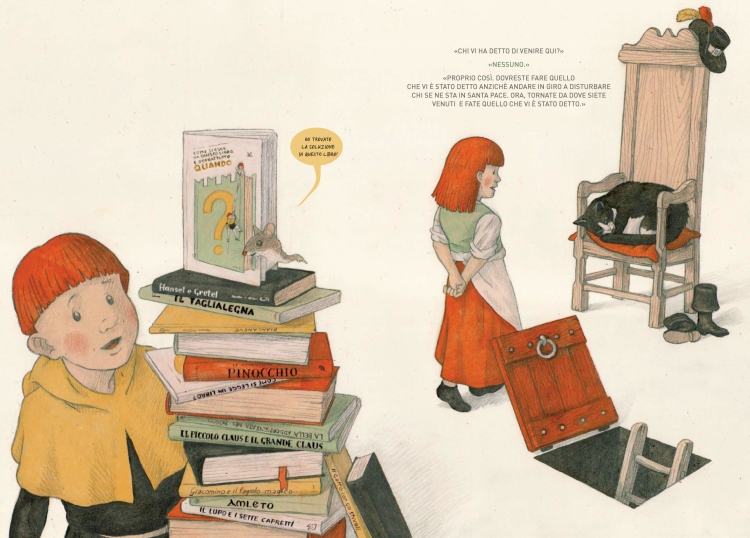 Maurizio Quarello talks about Come si esce da questo libro e soprattutto quando?/How to Get Out of Here and if Yes, When?

After “Come si legge un libro?/How to Read a Book”, this  is the second title by the couple Fehr-Quarello. This time, young readers have to help the two characters – again Hänsel and Gretel – find their way out of the book.

In this post, illustrator Maurizio Quarello talks about how he and Daniel Fehr created the picture book “Come si esce da questo libro e soprattutto quando?” featured in the BCBF online exhibition A UNIVERSE OF STORIES - Starring: the Book.

With the help of the reader Hänsel e Gretel have just succeeded in setting to rights the story in “Come si legge un libro” and they’re again already in trouble. This time they’re lost – in a book, of course – running here and there through the pages, trying to get out, getting entangled in other tales, asking loads of questions of wolves, librarians, carpenters, even Hamlet. But this time it’s the reader who by turning the pages backwards and forwards, will find the solution and – perhaps - the way out.

Like the previous book, this one is all about playing with the reader and creating a book that does not have to be read from the first to the last page but rather manipulated, going backwards and forwards through the pages and closing it (if the reader wants) only when the solution is found. But the problem can be solved only by breaking the rules of the game.

The author of this game-and-ideas book, Daniel Fehr, set out by preparing a simple storyboard to explain the project. I then worked on the definitive storyboard and the final images.


It was obvious that a project like this needed a storyboard with a special pace that alternated cuts with differently angled views, “moving forward and backwards like a movie camera”.


Again, in order to maintain the pace and give breadth to the pages, I chose to limit my palette to 3 colours: red, yellow and green, plus a neutral shade, white and black. I also cut out the backdrop from the images, leaving the white page as the background so that the illustrations could “breathe”.


The only unframed illustration is the last one – even if it might not be the last. It’s completely black and not at all reassuring because, after all, it’s not that bad to get lost in books; sometimes it’s better not to find your way out.


When the solution is finally found I chose to use the only close-up illustration in the book to underline that this page is not like all the others but a “secret page” ".


See you at the next book!

...after all, it’s not that bad to get lost in books; sometimes it’s better not to find your way out

Maurizio Quarello was born in 1974 in Turin. He has published about 40 books, in 21 countries of 5 continents. His books have received numerous awards in Italy, France, Spain, Belgium, Sweden and in Germany.
In 2012 he was assigned with the Premio Andersen Award as best italian illustrator. He has taken part in numerous group exhibits (in over 15 countries), among them he likes to mention Mostra degli Illustratori at the Children's Book Fair of Bologna (Italy) in the years 2005, 2006, 2007 and 2008. His illustrations were selected for the Bratislava Illustration Biennale BIB of Bratislava in the years 2007, 2013 and 2015.
In 2011 he began working as illustration teacher at Academy of Fine Arts in Macerata.

Daniel Fehr (1980) writes picture books and designs board games for children and families. He studied photography at Zurich University of the Arts and the School of Visual Arts in New York, and then he studied German literature and media at Princeton University. Daniel currently lives and works in Winterthur, Switzerland, the town where he grew up.