Behind the illustrators competition with Carolina Ballester 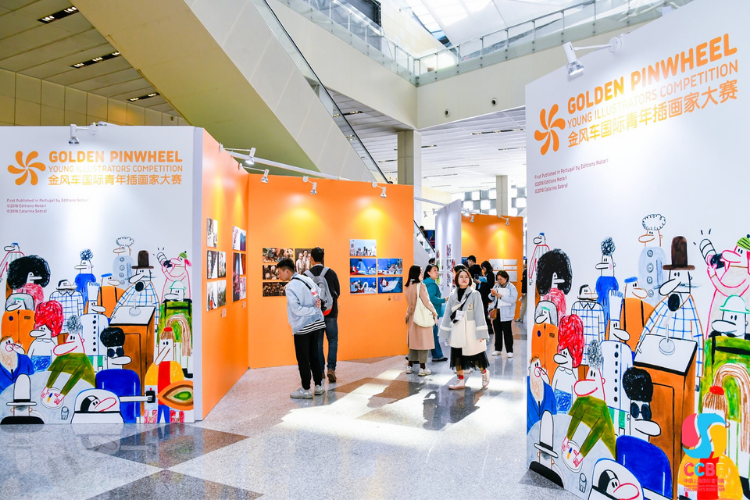 The Golden Pinwheel Young Illustrators Competition is an international illustration contest held annually as part of the China Shanghai International Children’s Book Fair (CCBF). Since its creation in 2015, the competition has been providing a venue for emerging illustrators to showcase their talent.

For its 6th edition, the 2020 Golden Pinwheel has generated an unprecedented level of enthusiasm, with 2,238 illustrators from 77 countries and regions entering their work for the competition.

On the occasion of the 8th China Shanghai International Children’s Book Fair (13-15 November 2020), the international jury of the Golden Pinwheel determined the Special Awards from among the 50 finalists whose illustration series were exhibited at the fair.

We asked Carolina Ballester, International Programme Manager at CCBF, to tell us something more about how the competition works and its growing success.

In these six years, the number of illustrators has grown. How has participation changed from country to country? Have there been “aficionados” from the very start, and are there nations now showing greater interest?

The increase of participants has been absolutely amazing. 273 in 2015, 778 in 2017, 1320 in 2018… all the way up to 2,238 in 2020! We are now receiving such a huge number of works that we have been forced to review the judging methods in the preliminary round in order to alleviate the jury member’s workload—nobody wants to kill a juror of exhaustion!!

Over and above the number of entries, the number of countries represented in the competition is also much higher than in the past. This has soared with our capacity to promote the competition internationally. In the two first years, we were really limited in resources and time, and our promotion remained quite “confidential”. Like so many other things in publishing, the human factor is key and we got great support from people and institutions we met around book fairs and events. Illustrators from countries like Iran, Poland and Portugal started participating (and winning) very early in the competition history thanks to those ties.

Today things are a little different. After the Shanghai Book fair teamed up with Bologna—that was in 2018—our two bookfairs have started working as a team to promote our respective networks. It is a real luxury to be backed up by the organizers of one of the strongest illustration exhibitions in the world! And it is thrilling to be able to reach out to so many illustrators.

In any case, I have noticed that in a lot of international competitions, some countries are very active and widely represented—Italy, Spain, France, most of Latin America, but also Russia, Japan, and more recently Korea—while others are under-represented despite boasting solid publishing industries and great illustration talents. The Golden Pinwheel is following a similar pattern: a lot of our competitors come from the above-mentioned areas although, as a China-based competition, we do have a solid base of Chinese participants. In the future I hope we will be able to reach more participants from other Asian countries like India, Malaysia or Indonesia. I am sure there are talents to discover that have not yet been dug out by their local publishing scene… That’s my next personal goal to help the competition become even more diverse!

The illustrators who decide to take part must be under 40. Why?

Ahahah! That’s THE question, a question that has earned up a lot of resentment on the part of artists over 40!

I know it is not always easy to understand the rule. This decision has got a lot to do with what was happening in China at the time we created the award. Not so long ago, Chinese picturebook production was mostly confined to a limited number of well-established illustrators, while younger talents clearly lacked opportunities to get noticed. China has only got a handful of schools where illustration is taught as a specialty and local social networks had only just started playing a role in promoting an artist’s work. Young illustrators generally went unheeded. They didn’t know each other much and found it difficult to break into the picturebook market. Chinese publishers also had trouble finding new talents. So, our immediate aim was to offer a platform where these two worlds—publishers and illustrators—could connect, and also create a catalogue that would be recognized as a handy discovery tool. Moreover, we wanted emerging illustrators to participate without feeling the pressure of their more experienced and more established peers. Age looked like a good criterion to keep the field opened to newcomers… and it worked! More than half of our finalists are artists under 30, yet they show impressive potential and maturity! Actually, illustrators from many parts of the world face similar problems to be recognized, so I think this rule is helpful to a lot of people.

Of course, there are brilliant artists who start illustrating quite late in their career. The age criterion is not perfect… Nonetheless, there are hundreds of illustration competitions throughout the world, the vast majority of them with no age limitation. It is healthy that each competition has different angles and regulations. It makes the whole panorama more diverse, complementary and inclusive. There’s room for everyone!

What about the visibility and the opportunities that the Golden Pinwheel offers?

You will often hear me say that we run a “poor” competition. We don’t have enough resources to offer substantial money to the winners. And I think it would be rather insulting to give a one-thousand-euro-prize to an artist coming first out of over 2,000 competitors. So, even if we can’t give good money, we at least try to give our winners as much visibility as possible, and we try to offer them experiences that they might not otherwise get.

Let’s take the example of our Grand Award winners–there are two every year, one for illustrators from China and one for artists from anywhere else in the world. We invite our Chinese winner to travel to the Bologna Children’s Book Fair with us. It is a cool opportunity to travel to Italy, as well as an important career development chance. As you can imagine, it is not always easy for young Chinese artists to know what’s happening beyond the borders of their country. They usually limit their promotion to Chinese social networks and are rarely seen on Instagram, Facebook or Behance, which are not in use in China. They rarely have their own website or browse other people’s sites. So, by taking them to Bologna, we try to make them feel they are part of the big picture—we organize a couple of events for them within the Bologna official programme; we give them hints on museums and sites worth visiting (which, in Bologna, means pretty much everything). We point them towards interesting bookstores and publishers. All in all, what we want is for them to get plenty of fresh inputs and understand how things work outside their usual world.

By the same token, the international Grand Award winner is invited to come to Shanghai as an official guest of CCBF. For all our winners so far, it was their first time in China, so that was a big thing! We invite them to give workshops and talks of all kinds at the fair, as a way of helping them build a name for themselves in China. But they also get a chance to meet a lot of different people and dig into Chinese culture—that means a lot of art, very interesting architecture and of course… a lot of very yummy food!

We also give visibility to our winners through more classical means, like the Golden Pinwheel Exhibition and our Yearbook, which has become a reference for publishers searching for talents and vice-versa. Few things make me happier than when editors among my friends get in touch to say they have spotted interesting art in the GP Yearbook. Also, all the visuals we used at the book fair are Golden Pinwheel-related, as we chose our visual identity artists from among the competition winners. This gives a lot of visibility and the artists see their artworks featured in surprising sizes and different places.

The list of opportunities for visibility and promotion of our winners and finalists doesn’t stop there. Last year, we made a few items of promotional merchandising with some of our winners’ artworks. We also try to link the Golden Pinwheel with our other illustration programmes, like the Illustration Residence, the Illustrators’ Avenue and the Survival Corner. And we are always on the look-out for more partners to set up innovative prizes and benefits that will give new life to the artworks. It is all about remaining creative and understanding our participants’ needs and expectations.

How does the People’s Choice Award work? What preferences stand out from what the public chooses?

It is still very hard to determine what is behind our voters’ choices, but I guess this is true for any election! The People’s Choice Award relies on the great diversity of people that take part in the vote. Anyone visiting the fair can vote for the People’s Choice Award. As you might know, we have many different visitors at the fair—from the professionals who make the books to the children who read them. If you are onsite, you just need to scan the QR attached to your favourite series of artworks and you’re done.But even if you are not coming to CCBF, you can still vote online thanks to the Golden Pinwheel digital gallery featured on our website.

From a stylistic perspective, it is really hard to draw conclusions. I think we’ve had a huge variety of winners, as you will see for yourself… If you reach any conclusion about the links between the winning artworks across the year, please let me know! 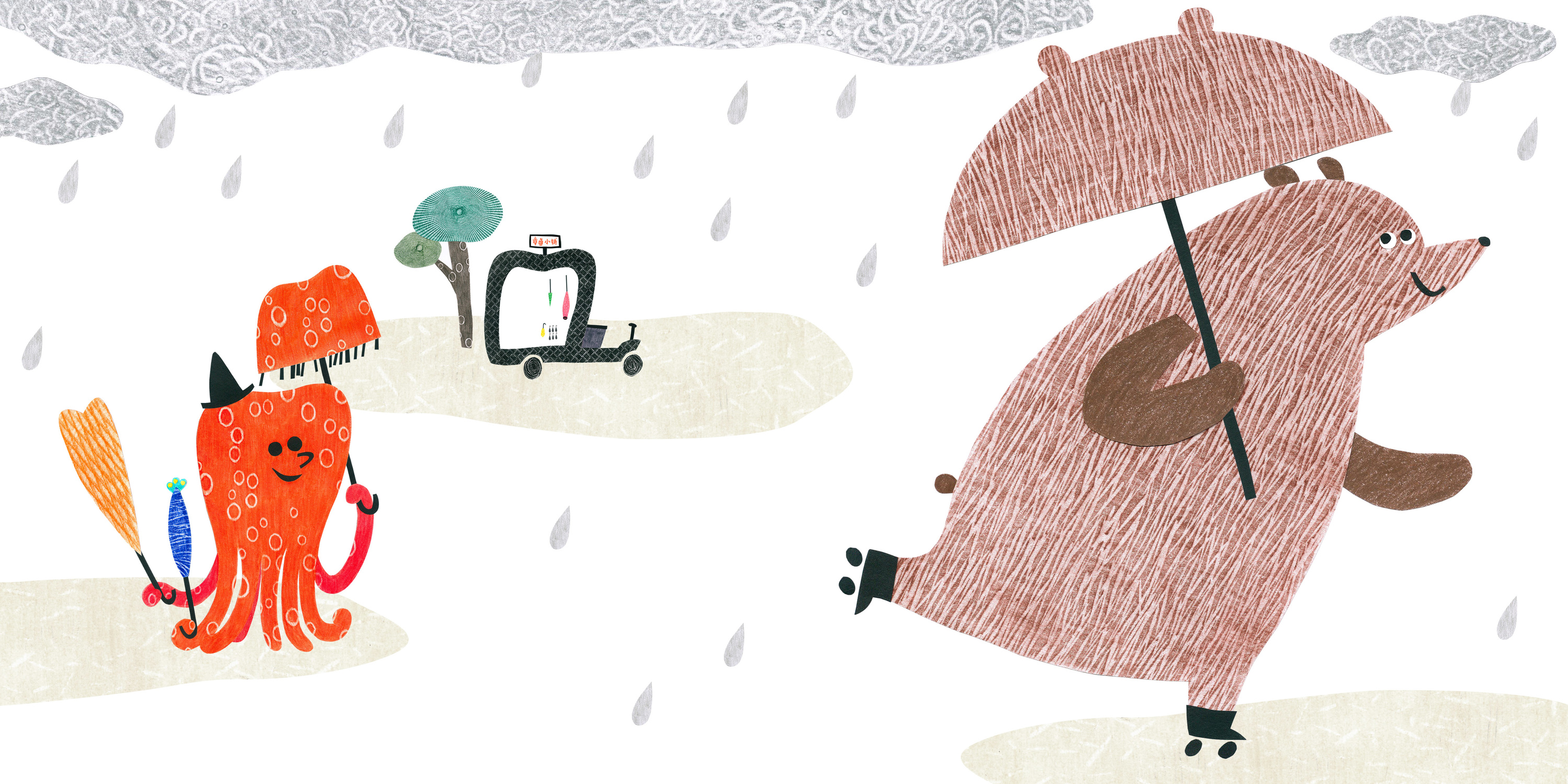 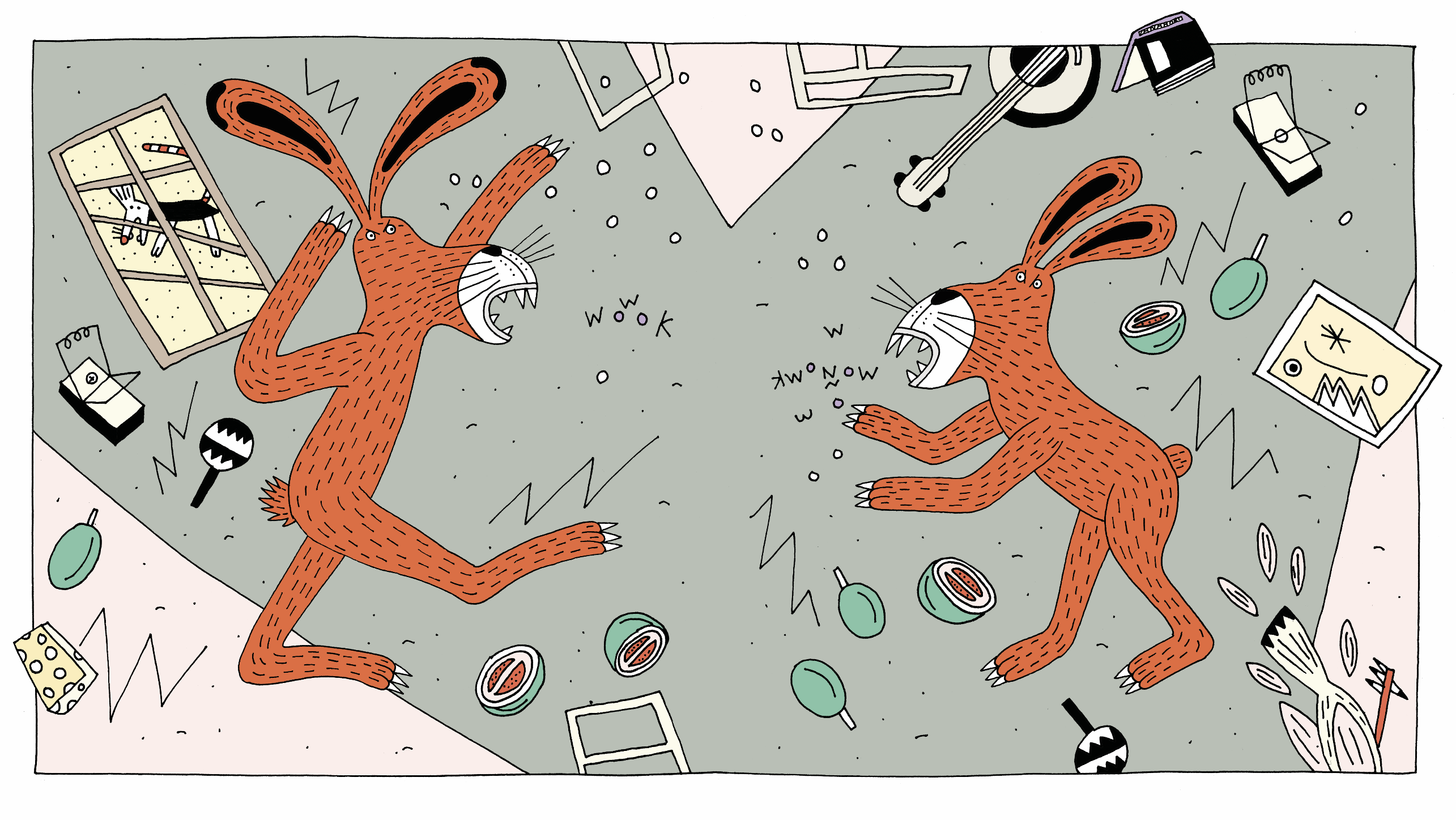 Tell us about this year’s jurors….

The quality of a competition is measured by the quality of its jury. That means we put a lot of effort into building a balanced, diverse and inclusive group of jurors—that’s no mean feat to repeat every year! The 2020 Jury followed the same logic. We had one publisher, three illustrators—one of whom is also a designer and publisher—and a university professor—coming from three continents.

Unfortunately, this year the jury had to work digitally all along the process. Usually, the first rounds of judging are held online but the process comes to a head when all five jury members meet in Shanghai in November to choose the winners of the special awards and mentions. It takes half-a-day and is a very interesting meeting to observe. You might think that in a jury, the dynamic is all about imposing one own’s choice over others. Actually, the process is all about discussion and reaching a consensus.

In 2020, our three international jury members from Korea, Italy and Canada were not able to come to Shanghai (blame it on the Covid pandemic) so the final Jury meeting took place online, and we tried to keep the same spirit as if the meeting were presential in Shanghai—that’s a new challenge for everybody!

With a bit of patience, we will all get reunited again in Shanghai… we have invited the 2020 jury members to come to the fair next year anyway, so there are plenty of great projects to look forward to in 2021.

Here’s the complete list of the 2020 Golden Pinwheel finalists! 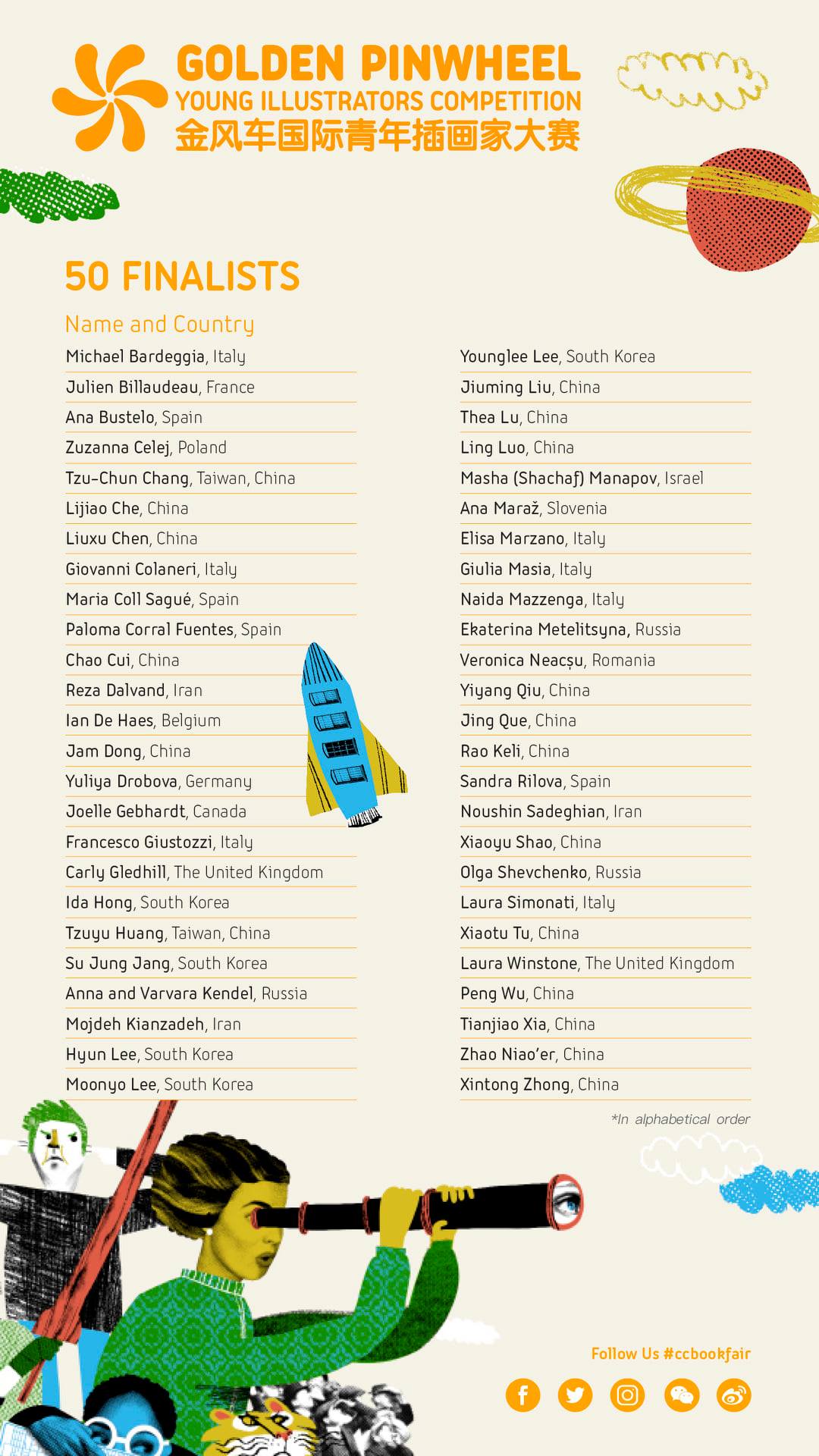 TAG: CCBF19
back to previous page