An interview with Daniela Almansi 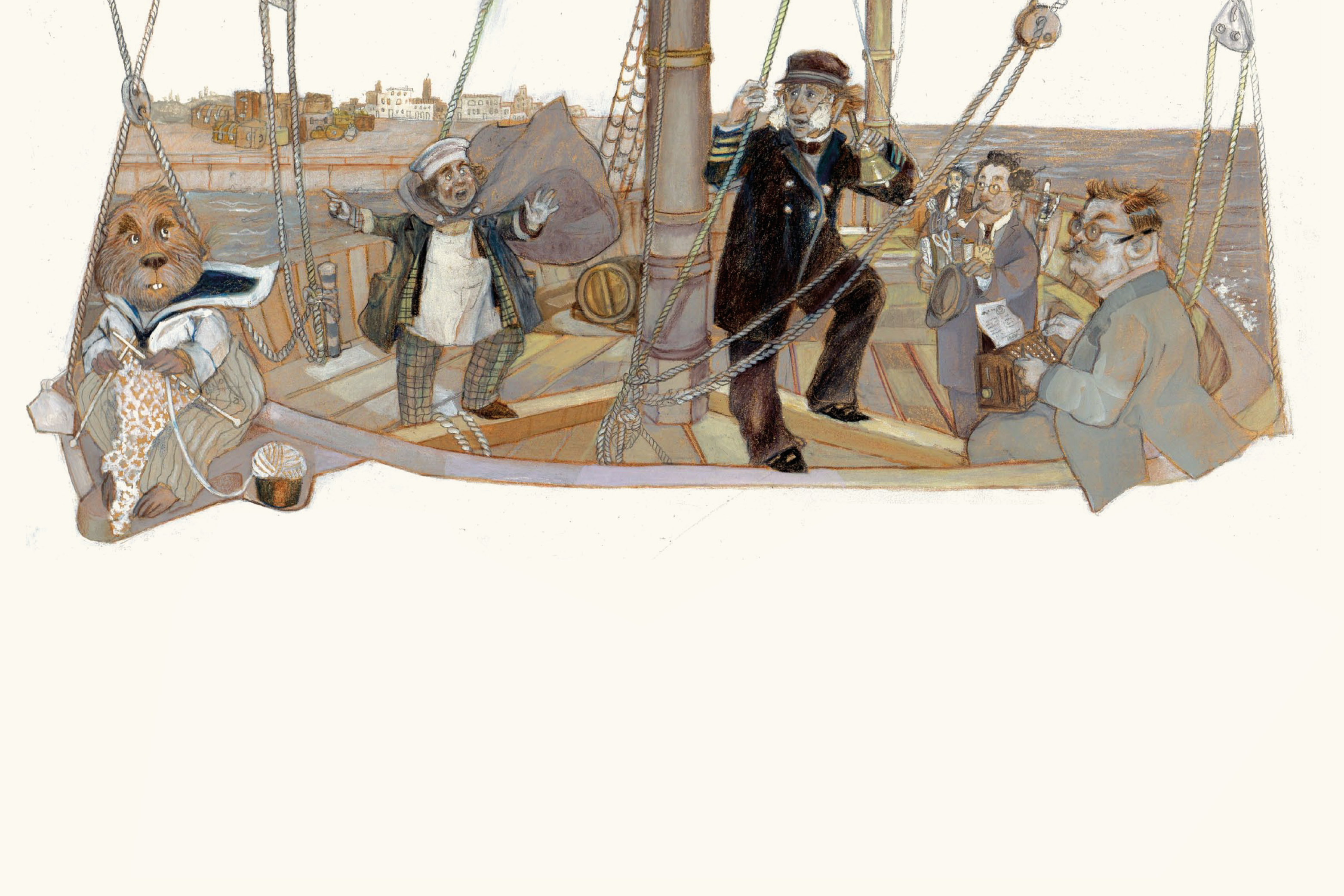 Following on from "Not so lost in translation", the new Fairtales column, Simona Mambrini - curator of the annual programme of events on translation at the Translators Centre -  talked with Daniela Almansi about translating the Nonsense.

A leading expert on the mechanisms underpinning the art of literary nonsense, Jean-Jacques Lecercle, sums up the dilemma of translating Nonsense in seven theses:

Daniela Almansi undertook the translation of the famous Nonsense poem: The Hunting of the Snark, by the Reverend Charles Lutwidge Dodgson, alias Lewis Carroll. After Alice's Adventures in Wonderland (1865) and Through the Looking-Glass (1871), The Hunting of the Snark (1876) is the third undisputed masterpiece by this genius of Nonsense – and perhaps his most untranslatable work, beginning with the title.

Let’s start by asking you how you approached the translation of an apparently untranslatable text like The Hunting of the Snark. Which one of Lecercle’s theses did you adopt?

I think these seven theses are not mutually exclusive but rather form what Lecercle himself called a "vicious circle"; in other words, to translate Nonsense you have to go through all seven stages of self-enquiry several times and hope that after a couple of rounds you’ll end up at the seventh and not at the first.

My gateway into the vicious circle was probably thesis 5: "Nonsense is endlessly translatable". When tackling the genius of Carroll, it’s comforting to tell yourself that no one translation can, or should, ever aspire to being the definitive ‘solution’ of the mystery of the Snark.

This leads to number 6: "Nonsense is endlessly translated". Although the Snark (1876) can’t boast the (almost) endless string of translations of its big sisters Alice in Wonderland (1865) and Through the Looking-Glass (1871), it had already had several Italian incarnations: one of the first was "Snarco" by Cesare Vico Ludovici, and the most recent "Squilo" is by Loris Pellegrini. But we’ve also had the "Snualo" by Milli Graffi and Sara Donegà, the "Snark" by Roberto Sanesi and Lucio Mazzi, the "Squarco" by Luca Tomasi, the "Slualo" by Paolo Pedrazzi, and the "Squallo" by Alessandro Orefice (and I only mention those I know). Some have tried hendecasyllables; some have attempted to reconstruct the original metric; others gave up completely while others again added an extra verse to each stanza... All these translations - including mine and those coming after me - although they all partly fail, nonetheless pay tribute to this ineffable elusive masterpiece of Nonsense.

The Snark is some king of mythical monster hunted by a motley crew of bizarre characters whose names all begin with “B” in the original text. What were your criteria when translating the names of these characters?

Boots, Bonnet-maker, Barrister, Broker... The translator slams right into this hurdle from the second verse. Unless by some extraordinary coincidence the two languages allow it, there’s no way you can keep the identity of the characters and at the same time have all the names start with the same letter – apart from the fact that having all the names beginning with B doesn’t seem to be a narrative imperative for that would bring us to the point on the vicious circle where we tell ourselves that Nonsense cannot or should not be translated, or even that there’s no need to translate nonsense. It is not surprising that almost all the Italian translations I know of (with the exception of Luca Tomasi's Caccia allo Squarco, which I recently discovered) dispense with the play on the initial letters. Louis Aragon's French translation also skips it.

But this is where the translation of Nonsense may suggest very different strategies from other types of translation. We know that Carroll's Nonsense applies the rule of "sound over sense", meaning that the story itself is often dictated by assonance. An example would be the Mad Tea Party episode in Alice's Adventures in Wonderland where the Dormouse tells the story of the three little sisters (here, the assonance is between "little sisters" but also "Liddle sisters"). On learning that the three sisters live at the bottom of a well and draw things that begin with the letter M, Alice asks: "Why with an M?". To which the March Hare simply replies: “Why not?”!

Take care of the sounds and the sense will take care of itself! This piece of ‘inverted-word’ advice the Duchess gives Alice seems like a sound piece of advice for the Nonsense translator too!

Indeed! Carroll creates Nonsense through assonance and arbitrary narrative, and I wanted to preserve this at all costs. Since the “C” seemed to work better for at least two of the main characters (Captain and Beaver – Capitano and Castoro), I decided to change letter of the alphabet, even if it meant a certain translating sleight of hand: "Baker" became a more generic cook - "cuoco", while "Butcher" retained only the secondary meaning, becoming an Executioner. Of course, in order to maintain the assonance, the Boojum had to change to “Cuggio”. The most radical change, required by metrical constraints, was to condense two characters into one. Barrister and Broker became a “contabile esperto di beghe legali” – an accountant expert in legal disputes. Not an ideal solution, for sure, but I think the lesser evil compared to sacrificing the metric or the sequences of assonances that are so important for the nonsensical intent of the poem. Fortunately, once you move on from Lecercle's fourth proposition (You don't translate Nonsense, you transpose it), you get to the fifth and the infinite translatability of Nonsense. Who knows, maybe the next translators of the Snark will find another solution?

You could say that the whole poem is an exercise in the apparently meaningful use of Nonsense words. I really like Carroll's anecdote about the birth of the Snark:

I was walking on a hillside, alone, one bright summer day, when suddenly there came into my head one line of verse - one solitary line - For the Snark was a Boojum, you see. I knew not what it meant, then: I know not what it means, now; but I wrote it down: and, sometime afterwards, the rest of the stanza occurred to me, that being its last line: and so by degrees, at odd moments during the next year or two, the rest of the poem pieced itself together, that being its last stanza.

This is quintessence Carroll Nonsense: follow what a sentence sounds like, however meaningless, and build a whole story from there.

The opposite - the Nonsense use of meaningful words - is much more frequent in the other great Victorian nonsense poet, Edward Lear. His limericks talk of an 'intrinsic' old man pulling out his hair and behaving like a bear (There was an Old Man of Peru); a 'judicious' young person who sleeps in the pantry with the mice (There was a Young Person of Bantry); and even a 'propitious' uncle beheading his niece by fanning her (There was a Young Person of Janina). But one of the very rare instances in which Carroll makes nonsensical use of meaningful words is, in fact, in the Snark, in Fit number three, when the Baker – my cook – tells the crew his story:

There was silence supreme! Not a shriek, not a scream,
Scarcely even a howl or a groan,
As the man they called "Ho!" told his story of woe
In an antediluvian tone.

Here "antediluvian" is disconnected from its meaning and context, and so it’s important to keep it in translation. But how? "Antidiluviano", in Italian, with its unfortunate accent on the fifth syllable, doesn’t fit in any position in the ternary rhythm of the poem... So, after pondering a number of variants (including "decrepito", "antiquated" “antiquato”, and a strained "anti-dì-luvi-iàno") I arrived at this solution:

The text came first. I had done the translation as a sort of personal challenge in 2019. I was already in contact with Orecchio Acerbo for the translation of another Nonsense poem (Crocodile by Korney Chukovsky, to be published in December 2021), and knew they had already published two texts by Carroll: The Jabberwocky (translated by Masolino d'Amico and illustrated by Raphaël Urwiller) and The Adventures of Alice in Wonderland (translated by Milli Graffi and illustrated by Yayoi Kusama). So, I submitted it to them and, to my great joy, they accepted! It was Fausta Orecchio's idea to invite Cinzia Ghigliano to "dialogue" with Peter Newell's 1903 illustrations. Rather than a "re-translation", it was really a visual duet, with Cinzia sometimes taking her cue from Newell, as in the depiction of the Baker/Cook, but at others, moving completely away, as she does with the Butcher/Carnefice - a big child for Newell and an adult with Hitlerian features for Cinzia. She gives her own re-interpretation of the bizarre creatures that populate the land of the Squarlo, adding a delicate touch of colour to the dark hues of her predecessor.

The operation was made all the more acrobatic because the translation has one less character than the original story illustrated by Newell! Cinzia worked on her own and we compared notes when the work was finished. It was wonderful to find that both drawings had the same deceptively naive humorous tone laced, however, with the disturbing, disquieting presence of the Snark / Squarlo.

Translating poetry is already an "extreme" type of translation, to use Franco Nasi's definition, therefore translating Nonsense should be an utterly  impossible task. But is it so? Or do the constraints of this sort of translation provide a freedom, channelling and allowing creativity to organise coherently, so that translation effectively becomes creative writing that gives the project new rules?

Translation itself is an extreme, impossible operation. What is the point of rewriting a book changing all the words and then saying it is the same text? It's just that most of the time we don't think what an absurd idea that is. Poetry reminds us of that since poetry emphasizes the form and sound of words; and this is even more the case with Nonsense, which is rightly often referred to as an extreme form of poetry.

And with that we've come full vicious-wicked circle: Translations of Nonsense are the most complete, satisfactory and successful of all translations!

Daniela Almansi grew up in Italy and Switzerland, where she studied and graduated in Russian, Comparative Literature, and Political Science. She continued her education in the UK with a Master's degree from Oxford in Children's Literature, then a PhD from the University of London in Nonsense Literature. She is fluent in Russian, French and English, translating from all of them. She has translated Lewis Carroll's The Hunting of the Snark (2021) and Korney Chukovsky's Crocodile, to be released December 2021 by publisher Orecchio Acerbo.