5 key words for the specificities of comics translation 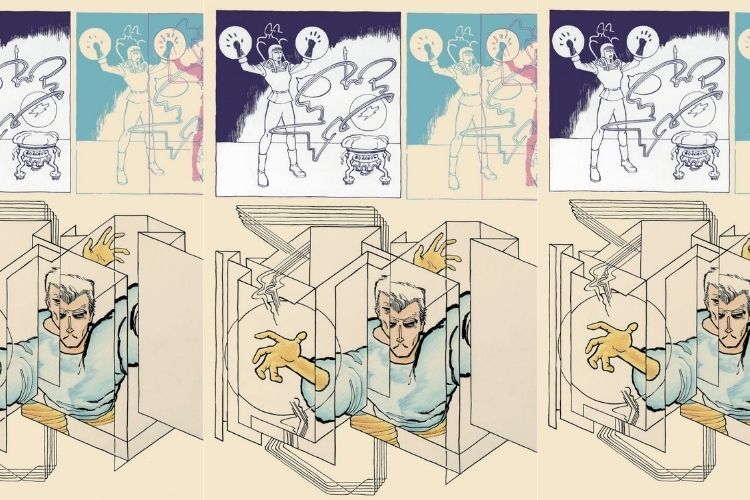 With a title like that it’s difficult not to get carried away! But I have sworn to myself that if I were to try and sum up the profession that has occupied my days for the last fifteen years, I would be as "pragmatic" as possible and define this kind of editorial translation in practical terms. To do so, I will use five key words.

It may seem obvious, but just as translating a written text requires “reading" (in the sense of "practice in reading"), translating comics requires familiarity with the world of comics. In other words, if you are not a comic book reader, you’ll be hard put to improvise the translation of the words in comic balloons which, let's not forget, are only one of the ways the narrative is conveyed. Comics are a complex medium. Overall meaning is delivered by several different semiotic planes working together: words, graphics, the rhythmic scansion of time, and editing. Whether a passion dating back to one’s childhood (as in my case) or a skill developed from a later interest, familiarity with comics is essential if you want to be, or become, a good translator of them. Understanding the graphic component (faces, expressions, gestures) and the scansion of timeframes (the rhythmic sequence of panels) is often essential to grasp nuance in the written text or fully understand a line of dialogue.

The text to be translated must be placed in a graphically circumscribed space. There are two types: the balloon and the caption – that’s an over simplification, but l won’t digress... Leaving aside the editorial rules, which may change from one publishing house to another, what’s fundamental to keep in mind, as well, of course, as the quality of the actual translation, is the occupation of space. The text, and therefore the translation of a comic strip, is made up of separate segments of an overall text laid out over a series of pages. The translated text is positioned in the balloons by a letterer using graphics/paging import software set to precise readability requirements. Identical content will be of different lengths in different languages. English is more concise than Italian: an Italian text is generally 20-30% longer than the corresponding English translation; Japanese is set vertically and read from top to bottom and from right to left. I take these two examples because English and Japanese are the source languages of most of the comics translated into Italian, followed by French and Spanish. Although today's digital technology allows some leeway in terms of font size and balloon and caption adjustment, the best comics translators are those who can render the original content in the same amount of space. This greatly facilitates the work of both editor and letterer, and makes for smoother workflows and a happier editor.

Not all comics are serialized. So-called "graphic novels" are usually longer, stand-alone compositions, which is, of course, another simplification. But the serial comic remains the main comics market format, a literary genre with its own rules, setting it apart from fiction, non-fiction and other types of publications. If you’re new to comics translation, then translating a non-serial work is certainly easier than trying your hand at a monthly album or volume that is part of an expanded and articulated narrative universe developed over the years (Marvel, DC, and Disney, to give examples I know from direct experience). This applied regardless of the objective difficulty of the text to be translated. Understanding and knowing how to navigate one’s way in a hypertext made up of multiple narrative forms, as well as putting together your own sector-specific glossaries, and having cooperative editors are practically essential starters if you want to work with certain publishers. The skills required of what interpretative semiotics would call the Model Reader of (some) comics include a knowledge of previous translations of the stories and characters: their names, previous stories, in other words, world building. Consistency and continuity of narrative in each particular language and culture are of the essence... A word of warning though. Continuity is not always cast in stone and may often undergo even major changes dictated by market requirements. While in 1992, the group 883 sang “Hanno ucciso l’Uomo Ragno”, using the Italian name, vocalist Max Pezzali wouldn’t do so today as Peter Parker's alter ego is now known even in Italy as Spider-Man (with a hyphen)...

Comics are not an island. While marketing strategies included transmedia franchising of properties well before the term “transmedia” existed, today exporting and exponentially multiplying entire narrative worlds across different media is a must. With the difference, however, that up to the 1980s, comics were largely licensees, with a successful movie or TV show giving rise to a comic strip. But in the last twenty years, the popular icons and narratives of the Ninth Art (Claude Beylie) have become extremely sought-after source material for media extension. What, you may ask, does all that have to do with the skills required of a comics translator? A lot. Anyone who wants to work in this field is duty bound to know what has, and is happening to the characters he/she translates as they are adapted in Italian (or in other languages) to other media, picking up the changes and making them part of their professional baggage - a requirement that in my case justifies a subscription to some three streaming providers! The complexity of this aspect of the profession is shown by the increasing attention given to localization by the most global franchises. For instance, translating the Star Wars comics requires a knowledge of the movies, animated series, novels, video games and even Lego sets the property has engendered.

The translator is the first link in a chain that will eventually lead to the Italian edition – in my case - of the title. It seems trivial, but it’s essential to keep this in mind. Our direct contact is the editor, whose task is to make sure that the translation "fits" as well as possible into the flow of the macro-serial narrative of the publishing house's titles. The guardian of continuity, halfway between Obi-Wan and Darth Sidious, the editor is often our safety net, as we execute somersaults in the balloons of the original text. Getting to know how your editors work and facilitating their task is all-important – and you may be dealing with four or five different editors at the same time.

Professionalism, punctuality and patience. The three "P's" are key to building a solid relationship with editors, and making them love us. Being professional may take, for instance, the form of succinct explanatory notes to highlight or explain certain translation choices, anticipating queries. Meeting deadlines can never be over-emphasized and is especially important in this particular publishing sector, where there is always room for improvement (and I refer that also to myself). Patience is being able to adapt dynamically to sudden changes in the publishing schedule - even if that shouldn’t be taken too far; it’s another way of making a working relationship go beyond the sacrosanct terms of your contract.

In conclusion, the profession of comics translator entails certain specificities particular to the medium, skills that can be built and refined starting from a solid semiotic grounding, a sincere passion and constant curiosity. Comics translators are constantly learning even if they inhabit balloons.

Andrea Toscani is passionate about comics, which constitute a large junk of his work as a translator. He works regularly with Panini Comics (The Complete Peanuts, Asterix, Bone, Adventure Time, Star Wars, World of Warcraft) and saldaPress (The Walking Dead, Liberty Meadows, Invincible, Nowhere Men...).

Ode to the Translators